Robby joined St. Luke's in 2004 following seven years in a large, multinational law firm based in Philadelphia, one year as a law clerk for the Honorable Herbert J. Hutton of the United States District Court for the Eastern District of Pennsylvania and three years as an adjunct professor at the Temple Law School, where he taught a class entitled, "Business Mergers & Acquisitions."

Mark serves as the Chief Medical Litigation Officer for St. Luke’s University Health Network. In this role, Mark is responsible for defending the Network, its physicians, hospitals and practice groups in significant medical malpractice litigation.

Mark has spent nearly two decades defending doctors and hospitals against claims of negligence. He began his career at an insurance defense law firm specializing in malpractice defense. In 2006, Mark joined the litigation department of Blank Rome, and he was later elevated to partner. Mark devoted the majority of his time at Blank Rome defending Network physicians and hospitals. He joined St. Luke’s in 2013.

Mark graduated from Bucknell University (BA 1990) and received his law degree from the Case Western Reserve University School of Law (JD 1995). Prior to attending law school, Mark was a research chemist at DuPont Merck Pharmaceutical Company.

Scott serves as Vice President & Associate General Counsel for St. Luke's University Health Network. He is responsible for providing advice in all aspects of human resources throughout the Network and representing the Network in both administrative and court proceedings involving labor, employment and education-related matters. Scott also oversees Employee Relations and serves as a senior leader in the Network's Human Resource Department.

Scott started his legal career as an associate in the labor department of a large, multinational law firm based in Philadelphia. Scott was later a founding partner and practiced from 1992 to 2006 with Heimbach, Spitko & Heckman, an exclusively management-side labor and employment law firm in Allentown. That firm merged with Lansdale-based Flamm Walton, P.C. in 2007. In July 2008, Scott joined St. Luke's after representing the Network for over fifteen years as outside counsel.

Jessica serves as Associate General Counsel to the Network with a focus on transactional matters, including licensing and technology contracting, real estate issues and general contract and commercial law matters.

Jessica has practiced law for 18 years and has served in a variety of in-house positions for public and private companies. She was previously a partner at the region's largest law firm. Jessica spent eleven years in Northern California and practiced with a large multinational law firm before moving back to her hometown of Allentown.

Jessica graduated from Stanford University (AB 1989) and received her law degree from The University of San Francisco School of Law (JD 1992).

Erin serves as Associate General Counsel to the Network. She is responsible for a wide variety of transactional matters, including contract and commercial law matters. Prior to joining St. Luke's in 2010, Erin was a corporate attorney in a large, multinational law firm based in Chicago.

Erin graduated from Saint Joseph's University (BS 2003) and received her law degree from Villanova University School of Law (JD 2007), where she was an Associate Editor of the Villanova Law Review.

Steve began his legal career in 1985 as a third-generation attorney in the Allentown firm of Lanshe, Lanshe & Lanshe. In 2004, he became the first Vice President and General Counsel for Sacred Heart Healthcare System responsible for all legal matters and multiple operational departments. He served in these roles until the merger with St. Luke’s in March 2018. Steve also served as a part-time Juvenile Court Master in Lehigh County from 1993 to 2014.

Jane serves as Associate General Counsel to the Network with a focus on clinical trial agreements and other transactional matters, including purchasing agreements, affiliation agreements, service agreements, general contract matters and general advice regarding various policies and procedures of the Network.

Jane has practiced law for 25 years and joined St. Luke's in 2007. She previously practiced corporate law as an associate at Moses & Singer in New York and consumer finance law at Blank Rome in Philadelphia. She has also served as in-house counsel for the former Chase Manhattan Bank and B. Braun. 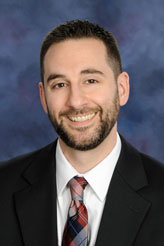 Mark has practiced law for 14 years and joined Warren Hospital in 2005. He previously practiced corporate healthcare law at several law firms in New Jersey with a concentration in complex financial matters and compliance with tax-exemption requirements.

Melissa serves as the Assistant Vice President of Government Relations and Community Affairs. She is responsible for coordinating the interactions of the Network with the Federal, State, County, and Local governments.

Melissa has 14 years’ of experience in municipal management. Her most recent position was serving as the Township Manager for Bethlehem Township (Northampton County), focusing on constituent services, citizen engagement, community and economic development, and public policy. She started her career in her hometown of Hatfield Township (Montgomery County, PA) and also served as the Borough Manager in Chalfont Borough (Bucks County, PA).

Sherry serves as the paralegal in the Legal Services Department with a focus on litigation and claims management. She joined the Department in February 2008 as the first paralegal for the Network. In this role, she is responsible for a wide variety of legal functions, including fact gathering and discovery, and all aspects of the litigation process. She works closely with Network litigation counsel, Network claims administrator and various outside counsel in this role. She serves as a resource to all Network and physician practice areas for legal matters and inquiries.

Sherry has been with the Network for over 25 years with experiences in various areas including the Emergency Department and the Occupational Medicine Department.

Sherry received her Paralegal Certification from Penn State University- Lehigh Valley Campus and her Pennsylvania Notary Commission in September 2008. She continued her education at Northampton Community College in the Paralegal Program and continues to pursue education in this field. Additionally, Sherry is an accomplished chef and received her Culinary Arts Degree from Northampton County Community College's Culinary Arts Program in August 2000.

Norma has been with the network for over 42 years and has held a variety of positions including Immigration, Administration, Human Resources, Risk Management, Physician Contracting, and Marketing. After 25 years of working in St. Luke’s Physician Group, Norma joined the Legal Department in January 2022 and is responsible for providing professional-level contracts administration management services within Legal Services. In addition to her Legal duties, Norma is also responsible for all immigration matters for St. Luke’s University Health Network. Norma works side-by-side with the Immigration lawyers to make sure that all sponsored visas are efficiently handled and up-to-date. In her immigration capacity, she is also responsible for maintaining immigration information for all employees including visas, green cards, naturalization papers, etc. Employees with ANY type of immigration paperwork should reach out to Norma to make sure that their personal information is uploaded into their Workday profile. Norma is also fluent in Spanish.

Jacky joined the Legal Services Department in September 2013. Prior to joining the department, she served as a Customer Service Representative for HomeStar Medical Equipment & Pharmacy and as a Staff Coordinator for the Visiting Nurse Association of St. Luke's.

Jacky is also fluent in Spanish.

Monica serves as the Legal Secretary/Paralegal in the Legal Services Department. In this role, she is responsible for a variety of legal functions, including preparing legal documents for attorney review, managing depositions prior to trial, and providing administrative support to the Vice President & Associate General Counsel and the Chief Medical Litigation Officer.

Monica joined the Legal Services Department in April 2010. Prior to joining the department, Monica worked as a legal assistant for many years while taking paralegal classes at Northampton Community College and Lehigh Carbon Community College.

Monica is also fluent in Portuguese.

Carrie serves as the File Clerk in the Legal Services Department. In this role, she is responsible for updating and maintaining our legal files, provider files, and driver/vehicle files. Carrie also provides administrative support to members of the department.