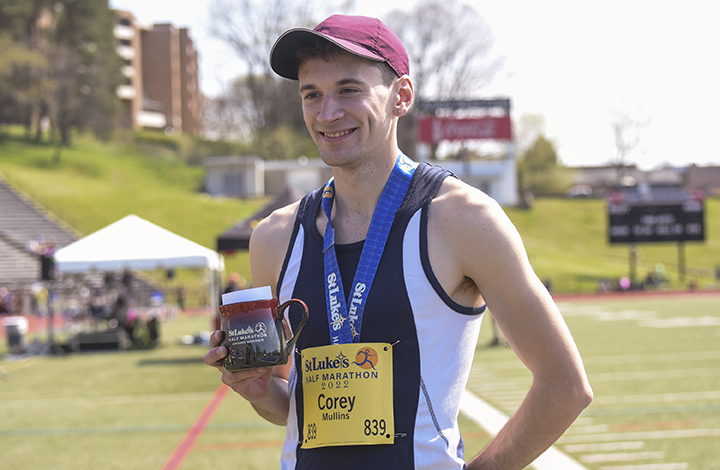 The Media Production Services Team of St. Luke's University Health Network will have to hustle to keep up with their newest employee, videographer Corey Mullins. On Sunday, the Bethlehem resident, who joined St. Luke's University Network just three weeks ago, achieved a fourth-place finish in the St. Luke's Half Marathon.

"I was thrilled with my finish," Mullins said. "I enjoyed the race. It has a sense of community. Everyone cheers on the runners and is happy." Mullins jumped to second place around mile four but then hit a wall around mile eight and a half. He finished with a time of 1 hour, 14 minutes and 37 seconds.

Raised in Danbury, CT, Mullins, age 24, began running in middle school. Throughout high school, he participated in cross country in the fall, indoor track in the winter, and outdoor track in the spring. He then attended Muhlenberg College, where he holds the outdoor track record for the 5K. A mid-distance runner, his most competitive events were the 800-meter and one-mile.

After graduating from Muhlenberg, Mullins moved to Bethlehem with his girlfriend who had a fellowship with Runner’s World magazine, where she currently works. Mullins accepted a job with Always On Air Studios in Hellertown. The company uses a specially equipped van to provide mobile, home and office video studio services. He shot live and recorded interviews with high profile guests and hosts for national networks, such as CNN and Fox News. He stopped running because he had to be presentable at a moment's notice during long days. Later, he worked at PhoenixFire Media before joining St Luke's.

Mullins said he likes to run now for the sense of accomplishment and the psychological benefits of running on wooded trails with only his thoughts. Earlier in 2022, he decided he would like to run competitively again, so he hired running coach Budd Coates.

"Not to sound immodest, but I have a talent for running," Mullins said. "It just comes naturally for me. After completing my run, I like to cheer on other runners, especially those who find running difficult, because I find them motivating. Continuing to run when it isn't easy is much more impressive than what I can do."

He encourages anyone to try running, adding it's one of the cheapest sports; all you need is a good pair of sneakers. But he advises new runners to purchase them from a store specializing in running shoes. The staff will measure your feet and recommend the best shoe for a proper fit.

As for Mullins, his goal is to win the St. Luke's half marathon next year and run the Boston Marathon someday.

"Professionally, I’d love to work on the set of, or edit a feature film, but I’m not sure,” he said. "It's hard to look more than a year or two ahead."

Finishing before Corey in the Male Division age 1-98 were: