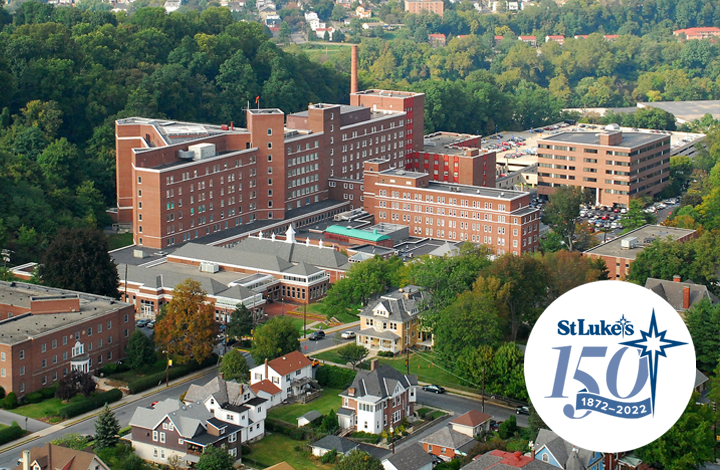 One hundred fifty years ago, a star was born – St. Luke’s Hospital!

St. Luke’s has been a cornerstone of the Lehigh Valley ever since. The Lehigh Valley’s oldest hospital was founded in the spring of 1872 to provide industrial workers, many of them from Bethlehem Steel, with local access to health care, eliminating the long journey to New York or Philadelphia for critical treatment.  A century and a half later, St. Luke’s continues to honor its commitment to local business and the community – as the Network’s iconic star shines as bright as ever.

Today St. Luke’s University Health Network is the Lehigh Valley’s biggest health care system, and it is the one that wins the most awards for quality, service and affordability. A fully integrated, regional, non-profit system of more than 17,000 employees, it provides services at 14 campuses that together operate the biggest network of trauma centers in Pennsylvania.  With more than 300 outpatient sites and annual net revenue of $3 billion, the Network’s service area includes 11 counties: Lehigh, Northampton, Berks, Bucks, Carbon, Montgomery, Monroe, Schuylkill and Luzerne counties in Pennsylvania and Warren and Hunterdon counties in New Jersey.

Dedicated to advancing medical education, St. Luke’s is the preeminent teaching hospital in central-eastern Pennsylvania.  In partnership with Temple University, the Network established the Lehigh Valley’s first and only four-year medical school campus.  It also operates the nation’s longest continuously operating School of Nursing, established in 1884, and 40 fully accredited graduate medical educational programs with 419 residents and fellows. In 2022, St. Luke’s, a member of the Children’s Hospital Association, opened the Lehigh Valley’s first and only free-standing facility dedicated entirely to kids.

St. Luke’s is the only Lehigh Valley-based health care system to earn Medicare’s five-star ratings (the highest) for quality, efficiency and patient satisfaction.  It is both a Leapfrog Group and Healthgrades Top Hospital and a Newsweek World’s Best Hospital.  U.S. News & World Report ranked St. Luke’s #1 in the Lehigh Valley and #6 in the state.  Three of IBM Watson Health’s 100 Top Hospitals are St. Luke’s hospitals.  The Network’s flagship University Hospital has earned the 100 Top Major Teaching Hospital designation from IBM Watson Health nine times total and seven years in a row, including in 2021 when it was identified as THE #1 TEACHING HOSPITAL IN THE COUNTRY.  In 2021, IBM Watson Health also named St. Luke’s among the 15 Top Health Systems nationally.  Utilizing the Epic electronic medical record (EMR) system for both inpatient and outpatient services, the Network is a multi-year recipient of the Most Wired award recognizing the breadth of the SLUHN’s information technology applications such as telehealth, online scheduling and online pricing information.  St. Luke’s is also recognized as one of the state’s lowest cost providers.

Additionally, St. Luke’s will award $150,000 in special grants to partner schools and nonprofits working to make a positive impact in our community.