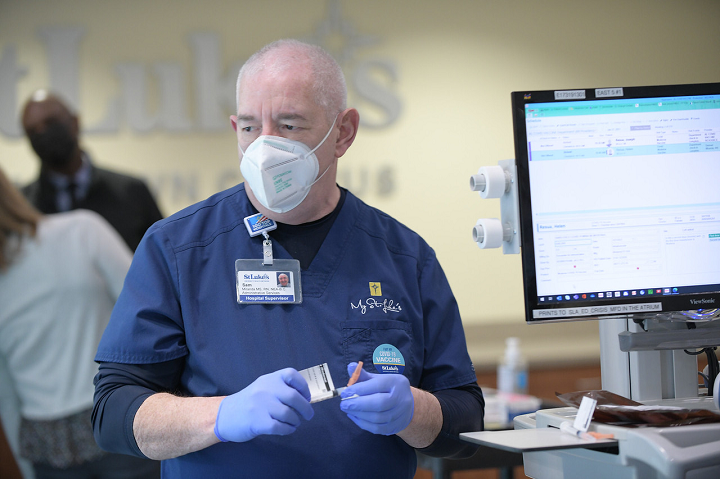 When Sam Miranda was a first-year nursing student at Sacred Heart Hospital back in the mid-‘70s, an instructor told his class, “Before you retire, you all will be involved in a pandemic.”

“We laughed, and thought she was crazy,” Miranda recalls. “Because of penicillin and all the other advances in medical science at that time, we naively thought a pandemic seemed unlikely.”

Now nearly a half century later, the 64-year-old nurse from Center Valley is hard at work giving hundreds of COVID vaccine injections each day at St. Luke’s Allentown campus, doing his part to immunize people against the virus that has taken the lives of some 400,000 Americans to date and millions world-wide.

From the bedside to the board room to the classroom, this long-time nurse leader and health care executive lives and loves his vocation. Miranda has retired from it several times, but only for a few months until there’s another challenge that inspires him back into service.

Shortly after he left Good Shepherd Rehabilitation Network in 2018 after 12 years as their chief clinical officer, they asked him to come back to run the organization when their president suddenly departed. He stayed for six months, then left to help take care of his now-three-year-old granddaughter, Claire Christina, whom he calls, “my angel.”

When his daughter-in-law, a teacher, went “back to school” online, Miranda was needed less at home, and so he looked for other ways to help, this time at SLUHN with whom has had a decades-long connection. That was in April 2020, as the pandemic raged.

“I told Bill Moyer (president of St. Luke’s Allentown), whatever I can do, I want to help,” Miranda says, who knows Moyer from the board of trustees of Cedar Crest College on which they both serve.

“I’m so impressed with Bill’s leadership style and how St. Luke’s fulfills its mission of taking care of the community.”

A few per diem assignments led to nursing supervisory roles for Miranda as the hospital struggled to save patients from the ruthless coronavirus.

Fast-forward to last December when COVID vaccines were approved in the U.S., and Miranda stepped forward for his next assignment. Since then, he has been spending sometimes 12 hours a day giving injections of the vaccine, working longer hours than he ever imagined as he cruised into retirement.

But he has no regrets. “It’s the right thing to do,” he says, “for the community and for St. Luke’s.”

And there’s a personal reason for his motivation. He also does it in memory of a relative who died of the virus on Christmas Day.

Having given 2,400 COVID shots and counting, Miranda will likely again blend being a grandad for his “angel” with new challenges at SLUHN when this pandemic is vanquished.

He’ll continue training the future nurses who will replace him and his aging generation.

He promises his students that today’s health care system is headed for other major changes that they’ll have to face during their professional lives. He’s seen a few of them in his 48 years in the industry.

Founded in 1872, St. Luke’s University Health Network (SLUHN) is a fully integrated, regional, non-profit network of more than 16,000 employees providing services at 12 hospitals sites and 300+ outpatient sites.  With annual net revenue in excess of $2.5 billion, the Network’s service area includes 11 counties: Lehigh, Northampton, Berks, Bucks, Carbon, Montgomery, Monroe, Schuylkill and Luzerne counties in Pennsylvania and Warren and Hunterdon counties in New Jersey.  Dedicated to advancing medical education, St. Luke’s is the preeminent teaching hospital in central-eastern Pennsylvania.  In partnership with Temple University, St. Luke’s established the Lehigh Valley’s first and only regional medical school campus.  It also operates the nation’s longest continuously operating School of Nursing, established in 1884, and 38 fully accredited graduate medical educational programs with 347 residents and fellows.  St. Luke’s is the only Lehigh Valley-based health care system to earn Medicare’s five- and four-star ratings (the highest) for quality, efficiency and patient satisfaction.  St. Luke’s is both a Leapfrog Group and Healthgrades Top Hospital and a Newsweek World’s Best Hospital.  U.S. News & World Report ranked St. Luke’s #1 in the Lehigh Valley and #6 in the state.  Three of IBM Watson Health’s 100 Top Hospitals are St. Luke’s hospitals.  St. Luke’s University Hospital has earned the 100 Top Major Teaching Hospital designation from IBM Watson Health eight times total and six years in a row. St. Luke’s has also been cited by IBM Watson Health as a 50 Top Cardiovascular Program.  Utilizing the Epic electronic medical record (EMR) system for both inpatient and outpatient services, the Network is a multi-year recipient of the Most Wired award recognizing the breadth of the SLUHN’s information technology applications such as telehealth, online scheduling and online pricing information.  St. Luke’s is also recognized as one of the state’s lowest cost providers.