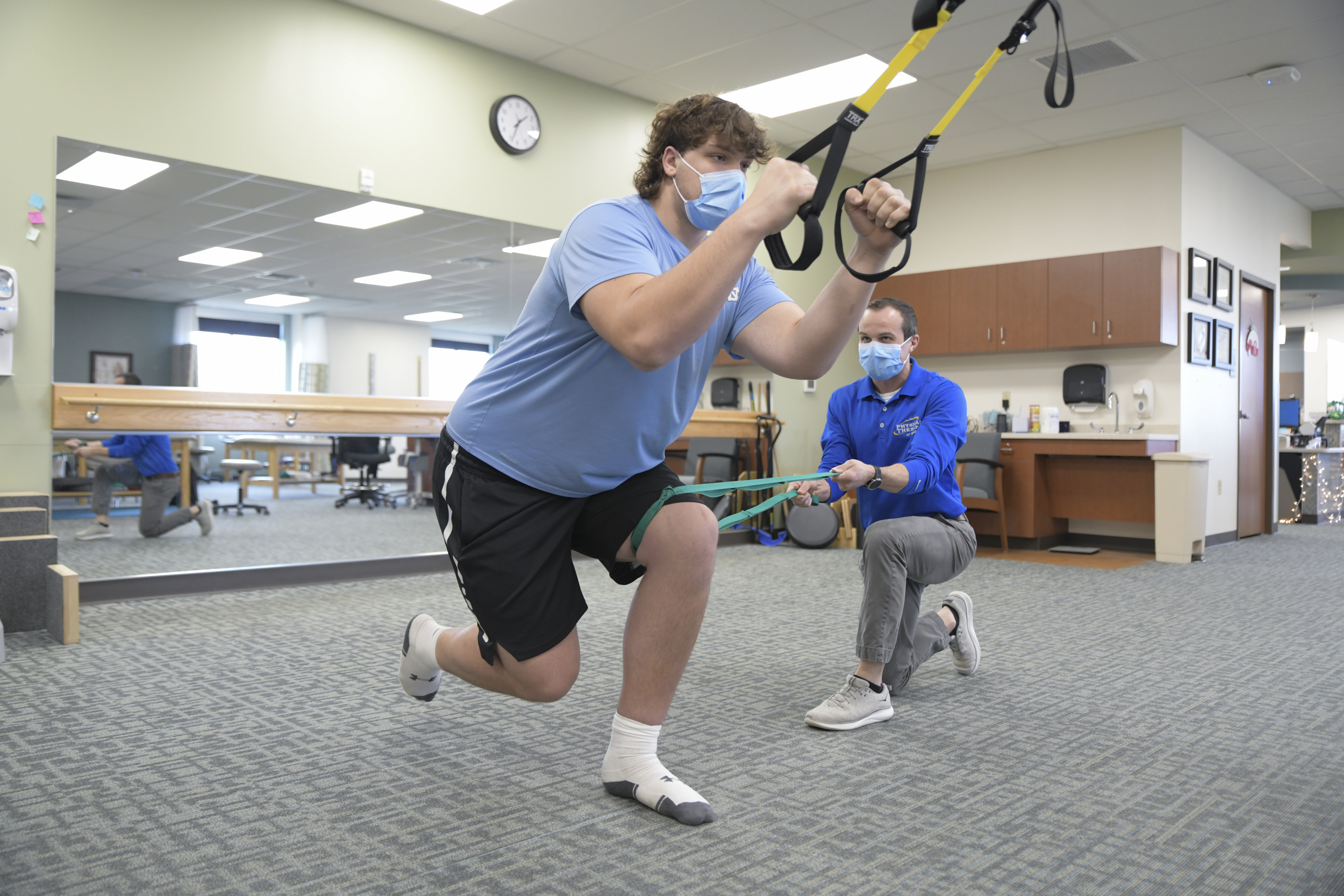 Each time Justin Kanyuk plants, pushes off or pivots his left foot and leg during a football game for the University of North Carolina next year, he’ll be relying on the strength and stability of his kneecap, which was rebuilt expertly by St. Luke’s orthopedic surgeon Scott Doroshow, DO.

This 18-year-old mountain of a young man will be on the offensive line at UNC to block defenders or create holes for running backs to plow through.  The 6’6”, 315-lb. Becahi standout has boundless faith in Dr. Doroshow, who surgically reconstructed his left knee after his medial patellofemoral ligament—the thin band that holds the kneecap in place—ruptured in 2019 during practice.

Kanyuk signed his contract for a full athletic scholarship to become a Tar Heel on Dec. 15 at a ceremony at Becahi, where he starred and started for four years as an offensive lineman for the Golden Hawks. In his sophomore year, he dislocated his kneecap as he lunged at a blocking sled and twisted it during practice.

“My leg went one way and my knee the other,” explains the student-athlete who lives in Bath.  The pain was instant and “excruciating,” he recalls. The fear of losing playing time, or maybe having to hang up his spikes for good, never entered his mind, knowing of St. Luke’s stellar reputation for orthopedic surgery and sports medicine.

Dr. Doroshow meticulously rebuilt Kanyuk’s knee using a thin “donor” ligament from a cadaver bank, anchoring it to his femur and to his kneecap with tiny, absorbable screws.

“It’s like new,” Dr. Doroshow explains. “He should never have any issues with this kneecap.”

The surgeon says he performs this hour-long operation about 30 times annually on athletes, but nearly that often on patients who suffer that tear outside of sports. He predicts Kanyuk’s should withstand the rigors, and sometimes punishment, of collegiate sports better even than his patient’s original, or “native,” ligament.

Kanyuk praises his surgeon as an all-star, adding “he explained everything before the surgery. I knew I could trust him.”

He recalls how much focus and sweat he put into rehabbing his knee after surgery, guided by physical therapist, Jeremy Kushner, DPT, at Physical Therapy at St. Luke’s—Nazareth. Now he continues to work to keep it strong and agile, sure he will be tested each time he’s on the gridiron.

“Justin is a very dedicated and motivated student-athlete,” says Kushner. “He hit his rehab goals sooner than I expected.”

His program comprised quadricep strengthening, range of motion and balance exercises and, later, sprinting and pivoting drills. Kushner was impressed with Kanyuk’s passion at PT and later when he continued the rehab at home.

The athlete is grateful to Kushner, too, saying “he taught me a lot about keeping my knee strong and healthy for the long run.”

Back on his feet after surgery and six months of rehab, Kanyuk was soon playing as aggressively as ever, shielding his quarterback from menacing defensive linemen and creating openings for Becahi’s running backs.

He predicts his chance of the same injury occurring to his right knee as “zero percent,” saying he continues to strengthen his quads and hamstring, keeping them flexible and firm as he was instructed by Kushner during PT.

But he’s more than a gridiron gladiator. Off the field, Kanyuk dives into his schoolwork, taking advanced placement courses, socializing with friends and volunteering at St. Luke’s Visiting Nurse Association.

“Since 2019, Justin has volunteered at several of our events including our annual Hospice Bike Ride, the Hospice Butterfly Release, and the Hospice Services of Remembrance for bereaved families,” says Lisa Giovanni, MSN, RN, president, Visiting Nurse Association of St. Luke’s Home Health/Hospice, Inc.

“We congratulate him for his scholastic achievements and his dedication as a high school student- athlete.”

Helping the Tar Heels score touchdowns will be the youngster’s goal on the field. Scholastically, he’ll pursue a degree in civil engineering with the same enthusiasm and smarts he brings to football and to the rest of his life.

He commends the teamwork of St. Luke’s Orthopedic Care and Physical Therapy that got him back on his feet and into the game that he loves, which led to the full-ride scholarship at a great university.

“I couldn’t have done it without Dr. Doroshow and Jeremy,” Kanyuk says. They’re a big reason that I am able to play again, that I’m back on the field doing what I love.”