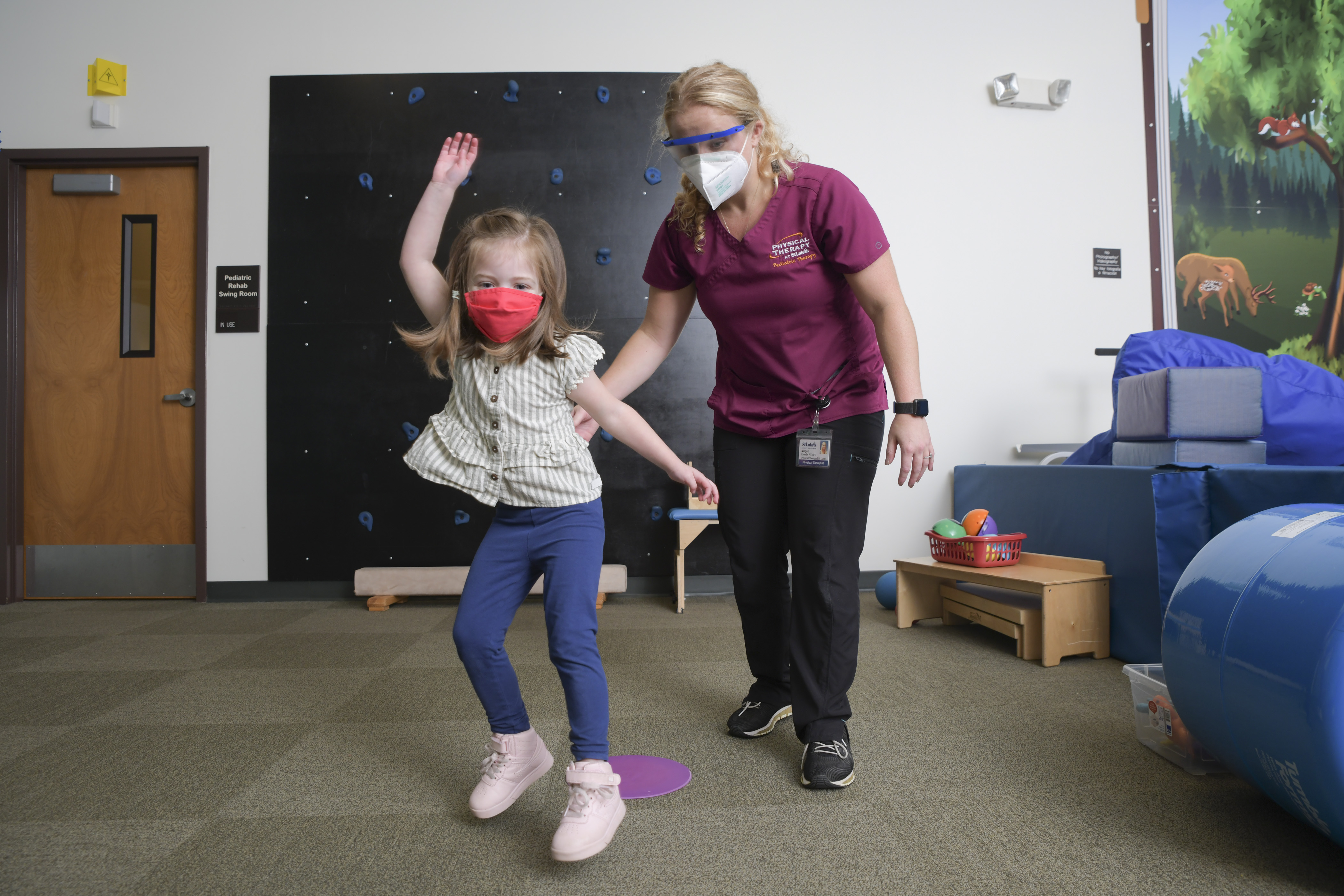 Three-year-old Peyton Hall has come a long way in a few months. In February, she had surgery to repair her dislocated hip (dysplasia). The complicated operation was performed by St. Luke’s Pediatric Orthopedic Surgeon Nicholas Grimm, DO, at St. Luke’s University Hospital in Bethlehem.

Dr. Grimm is one of the growing number of pediatric specialists at St. Luke’s who make the Network the preferred choice for parents in the Lehigh Valley. These highly trained doctors – many of whom will soon see patients at St. Luke’s new Pediatric Specialty Center now under construction in Center Valley – are experts in areas such as children’s orthopedics, cardiology, pulmonology, neurology, endocrinology, nephrology and gastroenterology.

Today, Peyton shows barely a sign that she had any serious, mobility-limiting disorder or surgery to repair it.

Hip dislocation is a mostly genetic condition affecting 1 in 1,000 children, typically starting in utero. Peyton’s hip’s ball and socket didn’t develop normally before birth, and as a result, she was born with an underdeveloped and dislocated left hip.

Dr. Grimm explains that this problem often impacts the first-born female in a family and sometimes occurs when a baby is born breech. A tell-tale sign of the hip dislocation after birth is a clicking sound from the hip and often limping, which begins when the infant begins to walk. There’s rarely any pain from it.

Peyton’s wasn’t discovered until late 2020 at the family home in Easton, says her father, Todd Hall.

“One day, just before Christmas, she started limping out of the blue,” he says, but there was no sign of a recent injury as the cause.

A trip to the St. Luke’s Anderson ER, and then to Dr. Grimm’s office, confirmed that Peyton needed surgery to repair her hip.

During the five-hour operation, Dr. Grimm completely rebuilt Peyton’s hip. He opened her hip capsule, removed abnormal tissue and inserted her hip back into its socket. This involved shortening her femur (thighbone) and inserting several screws and a plate to hold the bone together. He is one of the few physicians in the area who is trained to perform this intricate surgery.

Peyton recovered from surgery at St. Luke’s University Hospital. The hospital’s expanded pediatric services include a new Pediatric Intensive Care unit that opened in 2020, and a new Inpatient Pediatric Unit scheduled to open in Spring 2022.

“The growth that St. Luke’s Pediatrics has experienced over the past few years is nothing less than remarkable, reflecting St. Luke’s commitment to keeping care close to home for families in our community,” St. Luke’s Children’s Service Line Administrator Jessika Haynos said, noting that St. Luke’s also opened a new Women & Babies Pavilion at its Anderson Campus in Bethlehem Township in 2020.

Peyton had to wear a body cast for six weeks to immobilize her hip and leg as they healed, followed by a leg brace.  And rehab began soon thereafter.  All the while, Peyton has been smiling.

Physical therapists Rebecca Zuck PT, DPT, and Fran Rowley, PT, MPT, have been working with Peyton, getting her back on her feet by focusing on improving Peyton’s functional mobility, range of motion, postural stability, weight-bearing endurance and stamina. It’s a family affair for the Halls.

“Both Peyton and her parents are participating wholeheartedly in her recovery and rehab, both in outpatient therapy and at home as instructed” says Zuck.

“Peyton is a ray of sunshine and was particularly excited that she can now jump again and clear both feet!” says Rowley.  “She is working on stair climbing, running, moving on a scooter, and pedaling a tricycle.”

They, and Dr. Grimm, predict Peyton will be fully recovered this time next year. She will require yearly exams and x-rays as she grows to monitor the hip’s continued development

Peyton’s parents are thrilled with the expert and compassionate care their little girl receives at St. Luke’s. On a recent vacation, Peyton had no movement limitations, keeping up with her brother and sister, running, jumping and even swimming for the first time since surgery.

“Dr. Grimm was fantastic, as was his office staff and nurses,” says Todd Hall.

“He was thorough, showed us x-rays and explained the condition, surgery and recovery, too,” adds Peyton’s mother, Kirstein Hall.

Her physical therapists are top-notch, agree Mom and Dad, taking the time to customize and explain a treatment plan for Peyton that also includes home exercises which she does with her parents’ help.

“We couldn’t have asked for more expert and personal care,” they agree.

“She’s a great patient, always with a smile on her face, and they’re great caregivers,” says Todd. “She’s had a textbook surgery and recovery---perfect every step of the way!”