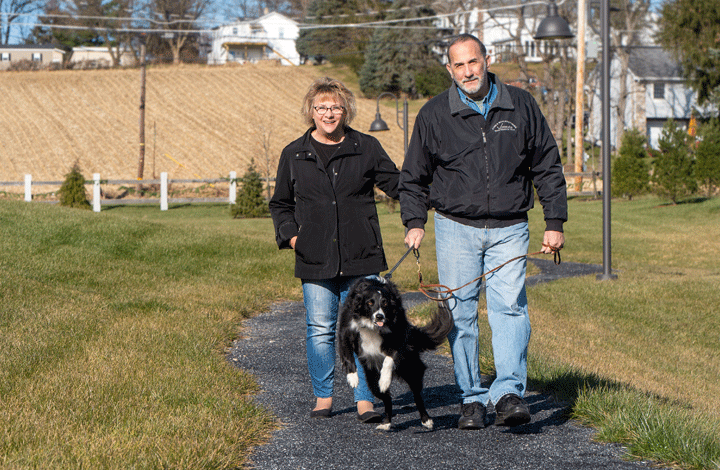 Imagine having a disease that makes you feel like you are drowning. Imagine being physically exhausted from a one-hour car ride. That was what Bruce Judd’s life was like until he received a new lung, thanks to a partnership between St. Luke’s University Health Network and Temple University Hospital.

An electrician who lives in Nazareth with his wife Stephanie, Bruce never imagined that he would need a lung transplant. But last year, a severe bout with diarrhea caused him to lose 16 pounds in 10 days. “It was summer,” he recalls, “and so I just thought it was dehydration.”

However, while at the hospital for observation, the clinical staff noticed that Bruce’s oxygen levels were critically low. That’s when the 63-year-old was diagnosed with a life-threatening disease: Idiopathic Pulmonary Fibrosis. IPF causes the lungs to become scarred and tighten, making breathing difficult. The cause is unknown, and the only definitive cure is to replace the malfunctioning lung with a healthy donor lung.

“IPF is a very aggressive and deadly disease. The disease is unpredictable and a transplant in most cases is necessary for long-term survival,” states Dr. Dotan. “Our collaboration with Temple allows patients who need lung transplant to receive care here, locally at St. Luke’s, as well as in Philadelphia for the actual surgical procedure and post-operative care. Temple currently conducts the highest number of lung transplants in the U.S. and its surgical team is one of the best in the world. Because of our collaborative approach, the patient has a whole team of experts working with them.” 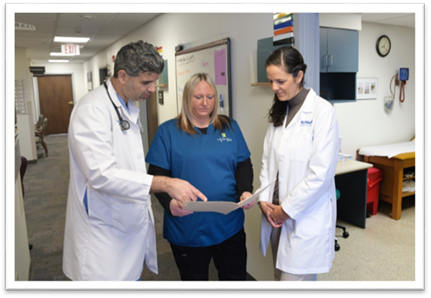 Over the next several months, Bruce had to undergo a litany of tests and procedures to assess whether he would be a good candidate for the transplant. “It is not an easy process, and it’s not for everyone,” says Dr. Dotan. “Patients go through an evaluation to make sure they are the best candidates, since the organ donation is limited.”

In total, more than 35 different tests and procedures were ordered over the course of several weeks, most of which were performed about 10 miles from Bruce’s home at St. Luke’s Anderson Campus.

“If I had to drive to Philly for all of those tests, it would have been awful,” recalls Bruce. It wasn’t just the inconvenience of travel time and parking, but the physicality of traveling in his medical condition. Bruce was on supplemental oxygen daily and couldn’t leave home without his tank. Beyond that, being in a car hurt. “I felt every little bump and turn in the road, and the next day, my body would be exhausted. It was so much better to be able to go right down the road to Anderson,” he said.

Another benefit of the strategic affiliation is that Temple regularly takes on some of the most challenging transplant cases, including patients who need to be evaluated and listed for lung transplant very quickly. Working with St. Luke’s, Temple can carry out an expedited evaluation process, which allows qualified candidates to be added to the national waiting list for a donor lung sooner.

The coordination of care Bruce received was a positive point in his experience. Because of the strong relationship between St. Luke’s and Temple, his doctors and care team were in constant communication. Mallory Scheller, RN, is the lung transplant coordinator and ensured that all of his tests and “to-do’s” were completed in order and on time. Sometimes she and Stephanie would be on the phone 2-3 times per day discussing Bruce’s care.

And then this past July, after only two weeks on the transplant list, Bruce got a call.

“I was shocked,” Bruce says about receiving notice that a donor lung had become available. “I honestly expected to be on the transplant list a lot longer, but I got lucky.”

He and his wife, Stephanie, left that evening for Temple University Hospital and his surgery was performed within 6 hours.

“It’s a miracle every time,” states Dr. Dotan. “I’ve been involved in the transplant world for awhile and it is always an awe-inspiring moment when you get to tell a patient it’s their turn. I couldn’t be happier for Bruce and his family. He was every thing you hope for in a patient – cooperative, highly-attentive and involved – and he stayed positive throughout the process, which helped him tremendously. Mental stamina is important for transplant patients.”

Post-transplant Bruce is doing well and getting back to normal life. He can now resume evening walks with Stephanie and their border collie, Bailey, and no longer needs oxygen 24/7. He even participated in a two mile walk this fall to raise funds for Pulmonary Fibrosis through the Wescoe Foundation. His next goal is to return to work; something he has surprisingly missed.

“I’m near retirement, so I never thought I’d say this, but I actually miss going to work!”

It is the policy of Temple University Health System that there shall be no exclusion from, or participation in, and no one denied the benefits of, the delivery of quality medical care on the basis of race, ethnicity, religion, sexual orientation, gender, gender identity/expression, disability, age, ancestry, color, national origin, physical ability, level of education, or source of payment.

Founded in 1872, St. Luke’s University Health Network (SLUHN) is a fully integrated, regional, non-profit network of more than 15,000 employees providing services at 11 hospitals and 300 outpatient sites. With annual net revenue greater than $2 billion, the Network’s service area includes 11 counties: Lehigh, Northampton, Berks, Bucks, Carbon, Montgomery, Monroe, Schuylkill and Luzerne counties in Pennsylvania and Warren and Hunterdon counties in New Jersey. Dedicated to advancing medical education, St. Luke’s is the preeminent teaching hospital in central-eastern Pennsylvania. In partnership with Temple University, St. Luke’s created the Lehigh Valley’s first and only regional medical school campus. It also operates the nation’s longest continuously operating School of Nursing, established in 1884, and 34 fully accredited graduate medical educational programs with 263 residents and fellows. St. Luke’s is the only Lehigh Valley-based health care system with Medicare’s five- and four-star ratings (the highest) for quality, efficiency and patient satisfaction. St. Luke’s is both a Leapfrog Group and Healthgrades Top Hospital and a Newsweek World’s Best Hospital. In 2019, three of IBM Watson Health’s 100 Top Hospitals were St. Luke’s hospitals. St. Luke’s University Hospital has earned the 100 Top Major Teaching Hospital designation from IBM Watson Health seven times total and five years in a row. St. Luke’s has also been cited by IBM Watson Health as a 50 Top Cardiovascular Program. Utilizing the Epic electronic medical record (EMR) system for both inpatient and outpatient services, the Network is a multi-year recipient of the Most Wired award recognizing the breadth of the SLUHN’s information technology applications such as telehealth, online scheduling and online pricing information. St. Luke’s is also recognized as one of the state’s lowest cost providers.