Rose’s son was about to enter kindergarten when she was diagnosed with colon cancer at age 34. She was determined to be there for her children – and remains committed to living every day to its fullest.

As a 34-year-old mom of a toddler and a preschooler, it’s safe to say colon cancer was one of the furthest things from Rose's mind. Her thoughts were occupied by things like work, getting kids to daycare or preschool, potty training, learning ABCs and getting a healthy meal on the table for a hungry family. Screening for colon cancer? Not on the radar. She was at a healthy weight, she paid attention to “clean eating,” steered clear of processed food and besides, 90 percent of colon cancer cases are in people over 50. Statistically speaking, she should not have been faced with colorectal cancer.

So when Rose started having troubling symptoms, she explained them away with a variety of possible causes. The main symptom, sporadic blood in her stool, became more frequent. In a few weeks, the blood in her stool became a daily occurrence. She hoped it was something simple like an internal hemorrhoid (based on her age and the fact that she had recently given birth, the probability of a hemorrhoid was significantly higher than a cancer diagnosis) but a colonoscopy revealed a mass in her colon and a 50 percent blockage, which meant Stage IIIb colon cancer.

Colorectal cancer is referred to as any cancer of the colon, the large intestine or rectum. Most colorectal cancers start as a polyp, or growth. When discovered early, a polyp can be removed, preventing it from turning into a cancerous growth.

Even for people with a strong family history of colorectal cancer, the recommended age to begin colonoscopies is age 40. And since Rose was so young, she was six years away from having anyone recommend or suggest a colonoscopy. But Rose considers herself lucky because she actually had a visible symptom that compelled her to see a doctor. Colon cancer is sneaky in that many times there are no recognizable symptoms, hence the nickname, “silent killer.” Colon cancer may be silent, but it’s a cancer with one of the highest death rates, behind lung and breast cancers. Often, by the time symptoms are obvious, the cancer is already in an advanced stage.

As soon as the mass in her colon and the blockage were found during the colonoscopy, Marian McDonald, MD, FACS, St. Luke’s Chief of General Surgery at Allentown Campus, admitted Rose to remove the blockage. After a week of recovering, she started her eight months of chemotherapy/radiation to ensure any remnants of cancer were obliterated.

Chemo was strenuous but manageable; the kids and day-to-day life kept her busy and focused on the future. But normalcy was short lived. She found more blood in her stool and went back in the hospital with a lower GI bleed and another week-long hospital stay.

Again, Rose tried to get back to normal, thinking the worst was behind her. But an annual, routine CT scan revealed cancer nodules in her lung. “I felt deflated; I was so positive throughout everything up until that point,” says Rose. “I was always so focused on the future and fiercely independent, but at that point, I doubted myself.”

But the doctors and staff at St. Luke’s were by her side when she felt that she didn’t have any fight left. David Andolino, MD, radiation oncologist, and his expert team including St. Luke’s thoracic surgeon, William Burfeind, MD, FACS and medical oncologist, Asim Ali, MD, devised a plan to treat and ultimately rid her of what was now considered metastatic colon cancer.

With cancerous spots on both lungs, surgery was necessary to remove the affected area in her right lung and Dr. Andolino used an advanced treatment, stereotactic body radiotherapy (SBRT) to remove spots on the other lung. “SBRT is essentially very high doses of radiation to a very precise target, typically done in 3-5 treatments,” explains Dr. Andolino. “It’s convenient for the patient because it’s quick and it’s also effective because it’s gets us to our goal of completely ablating the tumor.”

The last round of treatment was successful. Rose still gets regular scans, blood work and colonoscopies to search for signs of recurrence, but all scans are clean thus far with no evidence of disease. But she says that she doesn’t mind all the checkups; it’s like visiting old friends.

“The nurses and doctors still genuinely want to know how I’m doing,” explains Rose. “And that’s how they treated me every step of the way - compassionate, genuine and kind, never like a number and that’s a good feeling when you are essentially trusting someone with your life.”

Rose says she always felt very connected to her team of doctors, including Dr. McDonald, Dr. Burfeind, Dr. Andolino and Dr. Ali. “Some of them were my age with kids the same ages as my kids - I knew that they wanted me to get back to a ‘normal’ life because my normalcy is very similar to their own - they know how important it is to be a parent and take care of a family.”

Today, Rose is feeling good, and doing all the things that were difficult during her cancer treatment like traveling for work as a contractor for the Army Corp of Engineers, spending time with her husband and kids who are now 11 and 8, doing Boy Scouts activities and indoor speed skating with her family.

“As evil as a cancer is, there are so many benefits,” recalls Rose. “You are suddenly thrust into a world where days become a commodity and you can never have enough. I absolutely live my life bigger and sitting on the sidelines is not nearly as exciting or memorable as creating experiences.” 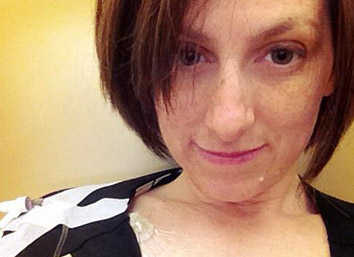