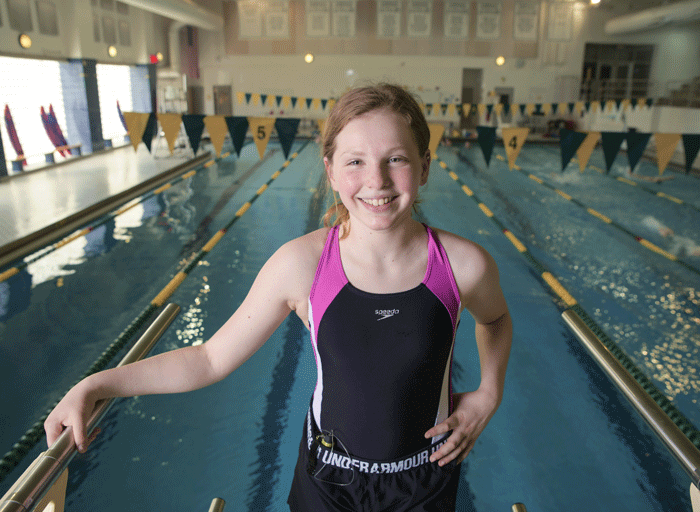 Carly Lenett is just 13 years old but has made a name for herself nationwide.

Carly, who has Type 1 Diabetes, started the foundation and fundraiser Team Carly Rocks to raise awareness for diabetes. Five-time Olympic gold medalist Gary Hall, Jr. has flown in to the Lehigh Valley from as far away as China to swim with her in her fundraiser and awareness event. Team Carly Rocks has also featured Berks County Olympic swimmer Kristy Kowal. The foundation has raised just under $200,000 to date.

The Emmaus teenager also competed in gymnastics before sustaining a rare left elbow injury last year. She would not be out of commission for too long, however, thanks to St. Luke’s extraordinary orthopedic care.

What started out as pain using her arms for gymnastics tumbles, bars and floor routines soon turned into every day pain performing such route tasks as turning a doorknob.


“Carly had an elbow osteochondritis dissecans, or OCD of the capitellum in her elbow” explained Daniel Heckman, M.D. of St. Luke’s Orthopedic Care. “It is thought to result from repetitive stress on the joint, which can disrupt blood flow to the bone under the articular cartilage.

“The small area of injured bone becomes weak and fails to support the joint surface. The articular cartilage may become unstable and can occasionally detach completely from the underlying bone, creating a loose fragment in the joint.”

Dr. Heckman said this type of injury is typically only seen in gymnasts and other overhead athletes. In addition to the pain, Carly had lost full extension of her elbow.

Following St. Luke’s cut-last philosophy, Carly rested the elbow for eight weeks, but that didn’t resolve the issue. Last October, Dr. Heckman explained that the OCD in her elbow joint had become unstable and surgery was necessary.

“Dr. Heckman was super nice and he’s obviously very good at his job,” Carly said with a big smile. “Originally he was going to have to take cartilage out of my knee to put in my elbow, but he came up with a great idea to use cadaver tissue. He was not sure if he could until he got in there, but he did, so he didn’t  have to make a second incision into my knee.”

But the surgery option wasn’t so simple because of diabetes. Carly has insulin dependent Type I Diabetes, like her father, Mitch.

“We know that diabetics typically don’t heal as reliably or as quickly as non-diabetics,” Dr. Heckman said. “That was a little bit of a concern. We needed to make sure her sugar was under very good control.”

Surgery was actually delayed a few weeks because Carly’s blood sugar levels were not precisely in the required range to proceed, but it ended up being an issue with the insulin pump, and then it was on to surgery.

During the operation, Dr. Heckman discovered that the OCD lesion had in fact broken loose, so he removed that piece during the procedure. He them transplanted a fresh plug of bone and cartilage from a cadaver into the defect in Carly’s elbow.

Carly underwent rehabilitation through Physical Therapy at St. Luke’s, starting with gradual stretching before turning to weighted exercises. But Dr. Heckman cautioned Carly and her family that few people return to gymnastics after such a procedure.

“It was a real wakeup call,” said Mitch Lenett. “We always took the approach that we would stand back and let Carly decide this stuff, but with her diabetes and all the other variables, and the constant injuries and knowing how diabetes hinders the healing process, we were concerned.”

Carly, however, decided on her own that she would give up competitive gymnastics, and instead use her tumbling abilities and her love of all things water to participate in diving.

This past winter, she dived for an Emmaus club and ended up winning first place at her first competition, which took place in Hershey.

“I just want to say how amazed we were from the moment we walked into St. Luke’s,” Mitch said. “Everyone, through the whole process with surgery, not just the doctors and nurses, but everyone down to the receptionists were so good to us. My impression is that St. Luke’s is the Nordstrom of healthcare. St. Luke’s didn’t treat Carly like just a patient or customer; they treated her like a little girl and a human being.”

One nurse hugged Carly and told her what she was doing with her Team Carly Rocks Foundation was inspirational. Carly found inspiration at St. Luke’s, too, especially with St. Luke’s Orthopedic Care. She even went back for a day and shadowed Dr. Heckman in the office, bringing her own special brand of extraordinary care.