St. Luke’s Orthopedic Immediate Care Gets Baller Back on the Field After Two Injuries 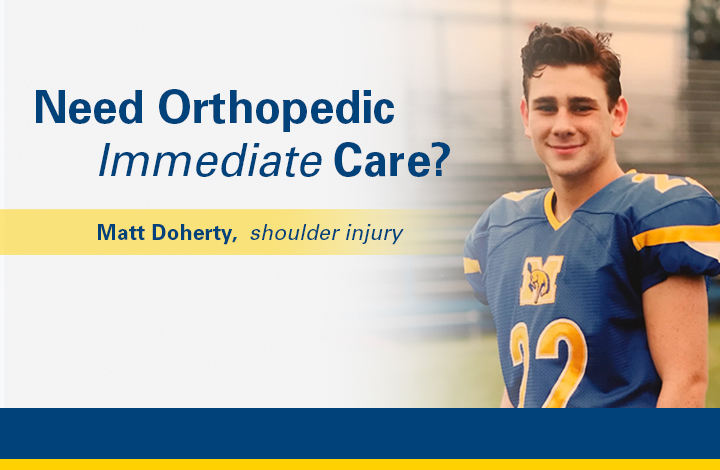 Parents of young football players are always on high alert for injuries. All sports certainly carry some risk, but the parents of football players are ultra vigilant. So knowing your child has access to the best and most immediate care in the event of an injury is definitely reassuring. Joe and Janice Doherty, parents of 17-year-old Matthew Doherty, were grateful for the immediate, thorough care they received at St. Luke’s Orthopedic Immediate Care after their son, Matthew sustained two injuries during his senior year football season.

The morning after one of his first games, Matt, a tailback and safety for Marion Catholic High School, felt soreness in his right arm and wasn’t able to move it. He had no indication of any injury during the game, so his symptoms were particularly concerning.

Joe and Janice immediately contacted St. Luke’s Orthopedic Immediate Care. Physician assistant, Jamie Weis, saw him right away at the Bethlehem office. Matt’s x-rays were negative, but Jamie sent him home with anti-inflammatory medication and encouraged him to follow up with his primary care sports medicine physician, Decosy Hercules, DO at St. Luke’s Health Center-Lehighton. Thankfully, Matt recovered quickly and missed only a few practices, but no games.

Unfortunately, two weeks later, Matt sustained a different injury during a game. This time, he knew exactly when it happened. He was carrying the ball and landed awkwardly on his shoulder after being tackled. Matt saw the team trainer the morning after his game and the trainer suggested he see Dr. Hercules as soon as possible. Matt sprained his AC joint and trapezius muscle, resulting in severe shoulder pain upon movement and touch and limited range of motion. Dr. Hercules was able to get Matt in quickly and implement a treatment plan right away.

“With both injuries, convenience of care was huge for us. Dr. Hercules and his staff are located near our home in Lehighton, so it was easily accessible for us in the midst of our busy schedules,” continues Joe. “Dr. Hercules was always very straightforward with Matt about what he needed to do to get back on the field. He was extremely thorough with the evaluation of his pain and range of motion and did not clear him until he knew he was properly healed and wouldn’t get reinjured.”

Matt was disappointed to miss two games, but he was confident knowing that he was healthy enough to play again. He had a great season and made it through the rest of his games injury-free.