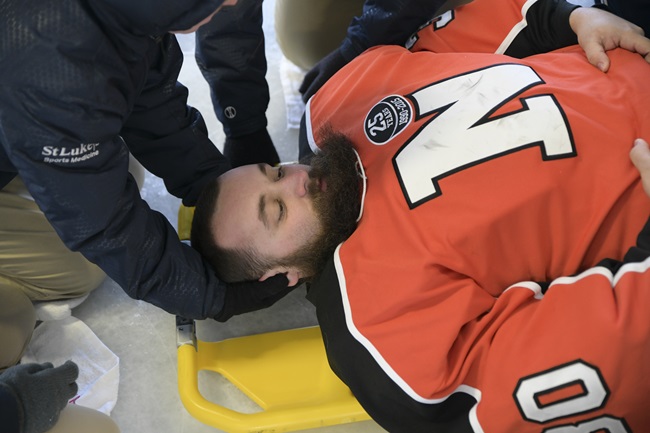 A running back for the Northampton High School football team had just scored a touchdown after bouncing off a would-be tackler.

“He was celebrating with everyone, and then in a matter of seconds, I could see he was deteriorating really fast,” said Perez, an Athletic Trainer with St. Luke’s University Health Network who is assigned to Northampton Area High School.

“He walked to the sidelines and said, ‘I don’t feel so well.’ We started evaluating him and he was completely out of it. He couldn’t walk. He couldn’t stand. He was not making sense. We activated EMS and he was taken to the hospital for further evaluation which determined he had an epidural hematoma, a brain bleed.”

Not so long ago, without a Certified Athletic Trainer on the sidelines, the running back’s life could have been in jeopardy.

The old days of coaches taping ankles and telling bruised athletes to put ice on their bumps has given way to Certified Athletic Trainers patrolling sidelines and practice sessions throughout every high school in the Lehigh Valley.

Other than the coach, the Athletic Trainer is typically the first person on the field when an athlete sustains an injury.

Athletic Trainers do much more than tape ankles and apply ice packs these days. They serve an integral role as healthcare professionals who can help prevent sports injuries, provide emergent care, and work with physicians and other members of the health care team to work with injured athletes and help prepare them to return-to-play in a safe manner.

“Every athlete can have different nagging injuries,” explained Cheree Iadevaia, a St. Luke’s athletic trainer assigned to Easton Area High School, who works mainly with football, wrestling and baseball. “But it’s the serious ones like head injuries, spinal injuries and joint injuries that demand immediate concern.”

Assessing the athlete, stabilizing the injury, and getting the athlete appropriate, rapid referrals helps aid proper diagnosis, treatment, rehabilitation and recovery for return-to-play.

Witnessing an athlete go down on the field for whatever reason and not get up spreads fear among parents, fans and coaches, but athletic trainers remove themselves from that emotional investment in order to maintain analytical objectivity.

“My first reaction is always to get out there and asses the urgency of the situation. It’s a pretty simple thing for me. I ask myself if this athlete is going to need a high level of emergent care. If the answer is no, I start dialing it back and assess the injury from there.”

“Outside the most common injuries such as ankle sprains, head injuries are prominent in football because it’s a collision type of sport,” Iadevaia said. “I worked with several athletes dealing with concussions this past fall.” 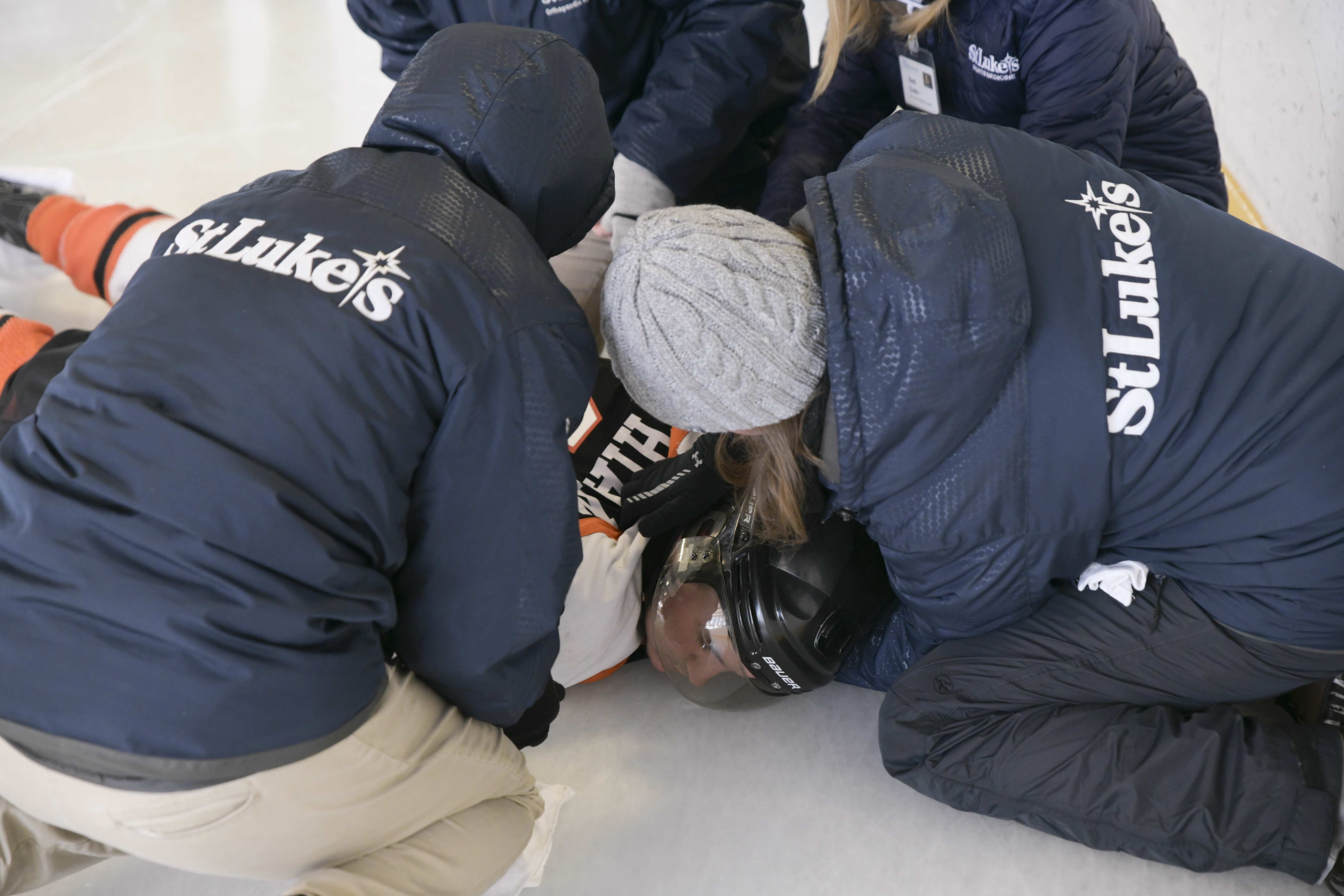 Athletic Trainers assess, treat and help prevent the full scope of injuries from knees and shoulders and bone fractures to bruises, scrapes and cuts, but anything with the head or spine takes on increased scrutiny and demands proper training and care.

Most times ACLs are non-contact injuries where an athlete’s foot plants and pivots, and the knee buckles. Athletic Trainers administer the Lachman’s test, among others, to assess laxity in the knee ligaments.

Athletic Trainers put athletes through a quick battery of neurological, cognitive and balance assessments when a head injury is suspected. They ask how the athlete feels at the moment, assess their short- and long-term memory, ability to balance physically, and perform a simple neurological screening to their cranial nerves and cognitive function.

Much like the NFL’s concussion protocol, once an athlete is assessed for a potential head injury, they cannot return-to-play unless cleared by a medical professional.

“The nice thing about football is that we have either a Primary Care Sports Medicine Physician or orthopedic surgeon on the sideline that can take over care of that athlete and clear them or refer them,” Iadevaia said, “but in other sports, where a physician is not present, I have to utilize our protocols to make the best clinical judgement as to whether or not it is safe for them to return to activity.”

“Knee injuries like ACLs can be serious, don’t get me wrong,” said Ostrowski.  “But in football, a neck injury or a head injury has the potential to impact every area in that student-athlete’s life from being a student to the future profession they will hold in the working world, to being a husband or a wife. We’re seeing more and more reports of these complications in former athletes.”

Dislocations of the upper extremities like the shoulder and elbow can often be more challenging than ACL tears. Reducing them becomes problematic because there is potential to cause nerve or vascular damage. The athletic trainer’s management of these injuries must be based on their training and a sound protocol.

OBSERVING FROM THE SIDELINES

Before they even get started evaluating player injuries, Athletic Trainers get involved in preventing them by watching them perform in practices and games.

“I’m watching for movements and making sure the athletes have good skills and aren’t doing anything that can lead them to an injury or put them in position where they get hurt or can hurt someone else,” Perez said.

In football, for instance, Perez will observe how a player’s head is positioned when making a tackle, making sure they’re looking up and seeing the target they’re tackling instead of looking down and hitting with the crown of the helmet, which could lead to cervical issues.

“I’m looking for subtle changes in movement patterns and joint angles, indicators of potential muscle strength imbalances that could lead to an injury,” Iadevaia agreed.

Athletic Trainers will often observe when an athlete is limping or favoring a side, dropping an arm before many teammates or coaches because they are focusing on the players themselves. With ankle injuries, they’ll often see immediate compensation as the athlete bears weight more on one side than the other.

“If we let things like that imbalance go, then we may end up dealing with two injuries rather than one because there’s too much stress on one side to compensate for the other,” Perez explained.

Getting that athlete’s pain, strength and range of mobility back to the injured joint is a critical step in making sure the athlete doesn’t sustain a compensatory injury on the opposite side.

“We’re looking at making them at least the same or better than before they got hurt," Perez said.

And, because there are so many sports going on at the same time between practices and games, injured athletes are often grouped together not only for efficiency in their treatments and rehabilitations efforts, but for peer motivation.

“You first have to reassure the athlete that this this is something we can work through together,” Iadevaia said. “We reassure them they can come back from it. And when we have a group of athletes with similar injuries, even if they are at different stages of recovery, it’s a great motivator for them because it becomes almost competitive.”

From the basics of rest, ice, compression and elevation to more technical therapies like TENS and other modalities to help control pain, and ultrasound to increase blood flow to promote healing, Athletic Trainers wear many hats and thus require many years of education and clinical experience.

When Ostrowski was an undergraduate at the University of Michigan, he applied for secondary admission to the Athletic Training Education Program so that he could sit for the Athletic Training Board of Certification Exam upon graduation, and then went on for his master’s degree even though it wasn’t required at the time.

Now, the certification is steadily moving toward requiring a master’s degree plus all the required clinical experiences to enter the profession. Some programs provide an immersive clinical experience that exceeds the minimum requirements.

In order to retain their National Board Certification (ATC) and Pennsylvania or New Jersey State License (LAT), Athletic Trainers are required to earn 50 continuing education credits every two years. Of these, 10 units must be designated as evidence-based courses by the Board of Certification (BOC).

The practical side, just like sports, requires a game plan.

When it comes down to game time or practice time, Athletic Trainers have already prepared their checklist of communicating with the coach, other medical personnel and emergency responders.

“Everything in life comes down to communications,” Ostrowski said, “so whether it’s with the coaches, staff, physicians, parents, or the athletes themselves, if everyone knows what their role is when an emergency takes place, then you can executive the game plan to get that athlete evaluated as quickly as possible and off the field for appropriate treatment.”

That football player Perez helped treat is on course to graduate. He stopped playing football but played other sports during his senior year. A junior wrestler whose dislocated elbow he helped stabilize was able to come back for his senior year to participate in football and wrestling.

Iadevaia has treated a football player with a shoulder dislocation, another with a hematoma of the spleen, and a volleyball player who ruptured a blood vessel in her elbow on a missed spike that caused compartment syndrome, requiring an emergency fasciotomy that night.

Ostrowski has worked with ice hockey players who have severed nerves in their leg with a skate, a team being accidentally poisoned by noxious gas, and a woman who ruptured her hamstring roller skating.

It’s all in a day’s work for an Athletic Trainer, and so much beyond the old school pictures of taping ankles and applying ice packs.

Athletic Trainers are on the frontline of quality, evidence-based healthcare for injured athletes, helping them to be better prepared on and off the field in preventing, evaluating and rehabilitating injuries.