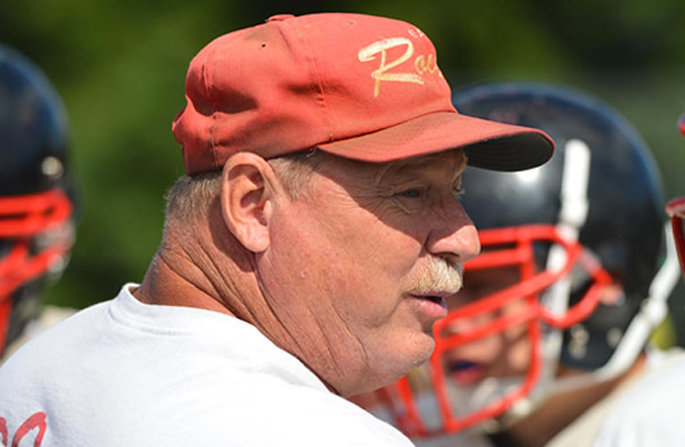 The Red Rovers are ranked #2 all-time in Pennsylvania high school football team victories and have been ranked as high as #7 all-time in the USA.

Now in his 42nd season as a football coach, having started at Notre Dame in 1973 before moving over to Easton as an assistant coach in 1976, Steve Shiffert is going as strong as ever and says he has “no plans to retire any time soon.”

But he didn’t feel this way during halftime of a home game at Cottingham Stadium last season.

Not the kind of ‘spiking’ you want to see.

“I felt so lousy,” Coach Shiffert says, “lethargic, weak, dizzy, not the shape you want to be in while coaching a football game, or at any time, for that matter.” 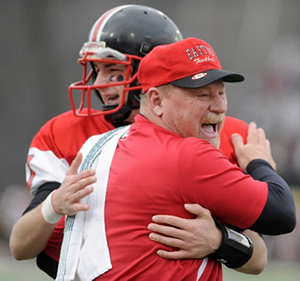 St. Luke’s/Easton High School athletic trainer Gary Gardiner was onsite for the game and noticed the distress Coach Shiffert was in. “Yeah, coach looked really bad,” Gardiner says, “flush white, ashen really. I’m a type II diabetic myself, I wear an insulin pump, and I knew Coach Shiffert had been diagnosed with type II diabetes some years before. So I tested Coach Shiffert’s blood and his numbers were super low.”

“Nobody was really managing my diabetes,” Coach Shiffert adds, “including myself, I hadn’t seen my doctor in probably over a year at that time. And when I did see him, the game plan was usually to just increase the same medication I had been taking. In hindsight, I really believe that the strenuous exercise I used to get officiating 60-70 basketball games a year is probably what saved me. But then I had two knee surgeries, one a knee replacement, the other an ACL replacement, and I couldn’t ref basketball anymore and that’s when things started to get less and less stable with my diabetes. That and my tendency to over eat after football practices and make anything I saw with chocolate in it disappear real fast.”

“Our treatment goal of course is to prevent the complications of diabetes,” Dr. Bhatt says, “and they can include an array of very serious conditions such as blindness, kidney failure, peripheral nerve damage, amputations, heart attack, and stroke.”

Board-certified in internal medicine and endocrinology, Dr. Bhatt graduated from Muhlenberg College in Allentown, PA with a Bachelor’s of Science degree in chemistry. He earned his medical degree from Eastern Virginia Medical School in Norfolk, VA. Dr. Bhatt completed his residency at the Washington Hospital Center in Washington, D.C. and a three-year endocrinology fellowship at the University of Pittsburgh School of Medicine. He is a Clinical Assistant Professor of Medicine at Temple University’s School of Medicine and is particularly interested in treating patients with diabetes.

“I first saw Coach Shiffert in October 2013 when we assessed his medications, and how he was doing, and he was not doing very well,” Dr. Bhatt says. “His blood sugar levels were spiking all the time, especially pronounced after meals, and his insulin wasn’t regulating his blood sugar. He felt tired all the time, dizzy, and thirsty, and he was urinating frequently.”

“The first thing I recommended for Coach Shiffert, as we do for all our diabetes patients,” Dr. Bhatt says, “is take full advantage of the St. Luke’s Diabetes Education Center.”

St. Luke’s Diabetes Education Center offers individualized appointments and group classes for education on the self-management of diabetes. The Center offers education for insulin pump therapy and continuous glucose monitoring. Educators provide patients with the skills they need to manage diabetes more effectively, to prevent complications, and to take control of diabetes. The Center offers a variety of services including nutritional counseling, Living Well with Diabetes classes, diabetes and pregnancy classes, and one-on-one visits for needs such as insulin and meter instruction.

“For Coach Shiffert,” Dr. Bhatt continues, “we changed his insulin from two kinds of injectable medicine to one. And for the next three months, with Gary Gardiner monitoring him, twice a day, and faxing me the results, we kept adjusting his dosage downward, tweaking it, until we arrived at the least amount of medication returning the best outcomes.”

“I really appreciated Dr. Bhatt’s approach,” Coach Shiffert says, “he didn’t do anything drastic and he told me I’d feel worse before I felt better, and he was right, but knowing what to expect made that easier for me. We changed up my diet some too and made sure I stayed hydrated, and by April, we were both able to see that I had been feeling good for like 3-4 months and I have felt consistently good ever since. It feels like a victory to me.”

When asked about his many accomplishments on the football field, Coach Steve Shiffert says his “longevity” is what he’s most proud of.

St. Luke’s is proud to be helping Coach Steve Shiffert keep that going.