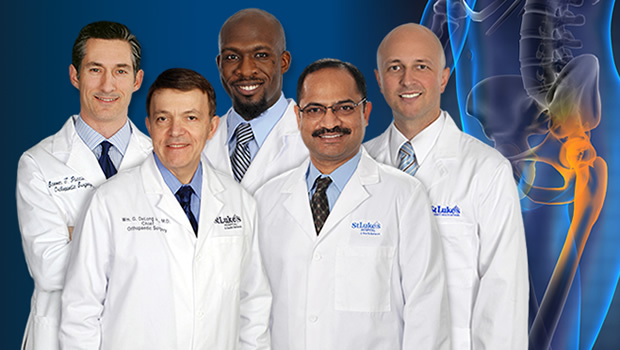 This minimally invasive hip procedure puts an end to stiffness and pain for Michael Pyle.

Michael Pyle of Bethlehem was ecstatic as he stood up the morning after his hip replacement surgery. For the first time in nearly 20 years both of his legs were the same length.

“I was extremely excited,” he said. “I was overwhelmed with happiness. It was so weird — good weird — because my legs were the same length. I was so used to having that difference.”

Prior to his anterior approach hip replacement, Michael’s right leg was about an inch longer than his left due to a childhood hip disorder. Dr. William De Long., St. Luke’s University Health Network Chief of Orthopaedics, corrected the disparity using sophisticated imaging technology during the surgery to perfectly align his legs. “He was spot-on,” Michael said.

Michael’s hip problems began when he was 10. For reasons unknown, blood flow to his left femur was disrupted, damaging the joint. Emergency surgery at the time prevented his hip from coming out of the socket.

As he grew older, Michael, now 29, developed a limp. He lived with constant discomfort ranging from stiffness to excruciating pain. Because he put less weight on the weaker leg, the other leg grew significantly stronger. This threw his back out of alignment causing more pain.

Thanks to the surgery and rehabilitation, however, that has all changed. Michael worked with St. Luke’s physical therapists before and after the operation to increase flexibility and strengthen his weaker leg and back. He continues to grow stronger by working out nearly every day at the St. Luke’s Health & Fitness Center at the St. Luke’s Anderson Campus.

Michael is grateful to the entire joint replacement team, especially Dr. De Long, who he describes as extremely compassionate. “He was right there with me the whole time. Dr. De Long was so excited because I was so happy.”

Dr. De Long has cleared Michael to do anything he wants except contact sports. Having been restricted by his physical condition as long as he can remember, Michael is eager to try new activities. “My goal is to try mountain biking and snowboarding,” he said. 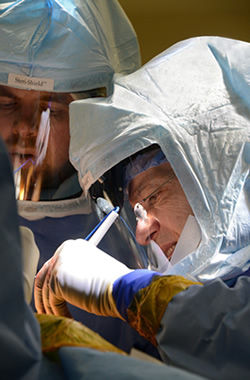 Patients, who receive an anterior approach hip replacement, experience less pain, leave the hospital sooner and recover faster than those who have traditional surgery, according to William G. De Long, Jr., MD. The procedure is performed through small incisions and the repair is made by going between the muscles rather than cutting them.

The anterior method approaches the hip joint from the front as opposed to the side or back. Dr. De Long, St. Luke’s University Health Network Chief of Orthopaedics, is so convinced of the procedure’s superiority that he no longer offers his patients the posterior approach option.

The anterior approach uses a technologically advanced operating table and special instruments that enable the surgeon to position the patient so the joint can be reached easily and safely from the front. After making a small incision, the physician accesses the hip joint by retracting a single muscle rather than cutting through them.

The table is equipped with technology that allows the use of X-ray images of the hip joint so the surgeon can place the ball and socket devices in the precise location. “This makes for almost perfect results every time,” Dr. De Long said.

Alternatively, with the more invasive traditional approach, the surgeon makes an eight-to-10-inch incision, cuts through the muscles and detaches tendons from the top of the thigh bone and socket of the hip joint. With this method, the risk of dislocation is three to seven percent, as compared with less than one percent with the anterior approach, he said.

“When you access the joint from the front, all of the tendons are still working to pull the ball into the socket so you significantly reduce the risk of dislocation,” Dr. De Long said. “You don’t disrupt any muscle tendon connections.”

Consequently, the body heals faster, making recovery and rehabilitation easier and faster. For patients with desk jobs, Dr. De Long has given them approval to return to work within three weeks.

“To further illustrate the difference between the two procedures, a patient who receives a hip replacement using the traditional approach is approved for driving at six weeks,” Dr. De Long said. “We are letting patients who have had anterior approach surgery drive at three weeks and probably could let them drive even sooner. Patients can also sit and sleep more comfortably, and can even lean down and tie their shoes right after surgery.”

Before deciding to have a hip replacement, Dr. De Long encourages potential patients to attend informational sessions and seek second opinions. Should they decide to have surgery using the anterior approach method, he recommends they seek out a surgeon experienced in the procedure.

“This is technically demanding surgery. You have to learn anatomy in a different way,” said Dr. De Long, who has performed this procedure exclusively over the past two years.