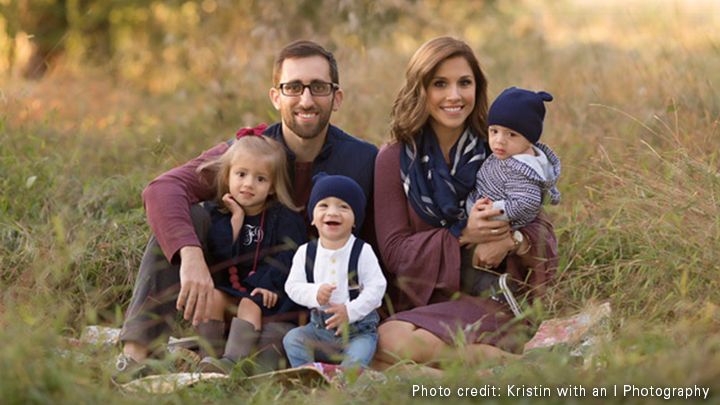 Mom of Twins Doubles Down on Her Confidence in St. Luke’s and it Pays Off

Lauren had a wonderful experience with her first pregnancy and delivery, so she had no doubt that she would stay with St. Luke’s and St. Luke’s Riverside Women’s Healthcare for baby number two. After the twin revelation, she was even MORE confident that she needed to stay with the experts who cared for her the first time around - she was going to need DOUBLE the attention… and more.

Any mom of twins can attest that the moment you find out that there are two babies, joy is marred by trepidation as you consider the idea of two cribs, two car seats, two sets of diapers and double the round-the-clock feedings. Carrying twins also comes with potential complications like increased risk for preterm birth, hypertensive disorders, diabetes, abnormal presentation and cesarean section. Lauren and her husband, Chris F., of South Whitehall, felt all of those thoughts, emotions and concerns when they found out that they would be having twins.

Before Lauren, 30, and Chris had their first child, Lauren researched extensively for a women’s health practice she could trust. Not having grown up in the Lehigh Valley, she asked around and researched online before honing in on St. Luke’s Riverside Women’s Healthcare and St. Luke’s Hospital. “One of the most important things for me was to find a practice that would be supportive of unmedicated, vaginal deliveries and St. Luke’s also had the lowest C section rate in the area,” recalls Lauren. But what really secured her decision was that St. Luke’s University Hospital Bethlehem is home to a Level 3 NICU; while Lauren didn’t realize it at the time, she would be thankful for that distinction.

Lauren had a wonderful experience with her first pregnancy and delivery, so she had no doubt that she would stay with St. Luke’s and St. Luke’s Riverside Women's Healthcare for baby number two. After the twin revelation, she was even MORE confident that she needed to stay with the experts who cared for her the first time around - she was going to need DOUBLE the attention. “When Lauren called and told me she was pregnant with twins, there was the initial thrill that always accompanies the announcement of multiples and then the medical brain kicked in with all the questions and concerns regarding the outcome of a twin pregnancy,” says Holli Warholic, DO, of St. Luke’s Riverside Women’s Healthcare. “But I reassured Lauren and her husband that the St. Luke’s team of obstetricians, maternal fetal medicine specialists and neonatologists would take the very best care of her and her precious babies.”

During the early stages of pregnancy, Lauren and Chris met with St. Luke’s Maternal Fetal Medicine team, led by Christopher Wayock, MD, to assess the progression of the pregnancy and pinpoint any potential complications. “Dr. Wayock is the most patient man we have ever met; we had a ton of questions and he answered all of them and never made us feel rushed,” says Lauren. “My ultrasounds were every two weeks, so we got to see the boys often and were reassured that they were doing well.”

Lauren’s pregnancy progressed normally until, during her appointment with Dr. Warholic at 25 weeks, Lauren complained of stomach tightening. After an in-office ultrasound confirmed that her cervix was short and contracting, Dr. Warholic sent her to the hospital for admission and a dose of steroids and magnesium to protect the babies’ brains. After a while, Lauren was stabilized, but she had dilated further and needed to remain in the hospital. A few days later she went into active labor and the doctors and staff prepared for a cesarean delivery.

At 25 weeks and 6 days, the Fontana’s identical twins were born; baby Luca weighed 1 lb., 14 oz. and baby Liam weighed 2 lbs., 1 oz. and they were immediately rushed to the NICU. “I’m so grateful to Dr. Warholic who, with the help of her colleague, Dr. Gillier, helped bring our babies into the world,” says Lauren. “Even after the babies were born, Dr. Warholic continued to spend countless hours with us in the NICU, even visiting and spending time with our boys when we weren’t able to be there - she has become so important to our family.”

Lauren stayed in the hospital for four days after the babies were born, while her husband, family and friends helped care for her toddler. The NICU staff, led by Kimberly Costello, DO, director of neonatology, helped Lauren in every way - making sure the babies had plenty of skin-to-skin contact and the healing power of breastmilk as much as possible. “They taught us everything we needed to know about taking care of micropreemies and stressed the importance of taking care of ourselves, which took away some of our guilt about being away from the boys. Whether we were in the hospital or at home, the doctors and nurses all stayed in touch with us and made themselves accessible for our questions.”

The NICU doctors and nurses also always made sure Lauren and her husband were comfortable and informed, yet empowered to make decisions for their babies. “It felt like we were part of the team making decisions about their care; they gave us educated and insightful suggestions, but they always made us feel like we knew our boys best so we were the ultimate decision makers.”

Lauren and Chris wholeheartedly believe that there was no safer place to deliver their babies than St. Luke’s Hospital. They also advise parents to consider the hospital’s NICU when weighing delivery options, even though your baby may not need it.

After 97 days for Luca and 99 days for Liam, the family was united at home on Christmas morning. “The doctors and nurses worked hard to make sure the babies could be at home to spend their first Christmas morning with their big sister,” remembers Lauren. And while being at home with two infants and a toddler is certainly not easy, Lauren is thankful and ever mindful of the blessing that it is to be home.