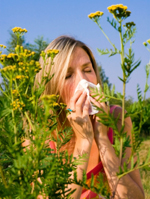 With a bit of planning,
effort and common sense,
many allergy sufferers can
limit and even avoid
symptoms.

Learn more and Get
Your 4-Day Pollen Count
Forecast!

Allergies are common hypersensitivities or exaggerated immune reactions to substances (allergens) that typically do not cause problems for most people. The immune system reacts to an allergen by releasing chemicals (histamines) that can cause a variety of symptoms, including teary eyes, a runny nose, itching, rashes and more. The symptoms vary from person to person, and can range from mild to life-threatening.

St. Luke’s doctors are specially trained and experienced in diagnosing and treating allergies.

If you need a doctor to help with an allergy, contact St.&nbspLuke's InfoLink.

Asthma – Blocked flow of air going in and out of the lungs caused by inhaled allergens that causes inflammation, tightening of the throat muscles and extra mucus production.

Hay fever – Allergic reaction to airborne allergens, including pollen, dust, mold, cigarette or cigar smoke and more. Symptoms of hay fever are sneezing; watery and/or itchy eyes; runny nose; burning in the throat; and itching in the mouth.

Eczema – Dry, itchy skin that can be caused by allergens, such as pollen or pet dander.

When the body goes into allergic shock, it can respond in many ways, including:

Allergic shock can be a life-threatening situation. Someone who is experiencing any of these symptoms should seek medical help as soon as possible. People suffering from allergic shock need epinephrine, a hormone (adrenaline) that increases the heart rate to prepare the body for an emergency.

Of course, the best way to prevent allergic reactions is to avoid the things that cause allergies. However, this isn’t always realistic or possible.

In addition to epinephrine, several other medications alleviate the effects of allergies, such as: