Cancer took Janice by surprise. She did her research and consulted with doctors at St. Luke’s, as well as the University of Pennsylvania. Ultimately, she put her faith and trust in Dr. Taylor and the team at St. Luke’s.

Janice Schnabl, 62, of Berks County, never knew anyone with cancer. She and her husband of 37 years, Martin, were fortunate enough to have never been touched by cancer’s devastating effects, but Janice soon learned that being touched by cancer could actually be a very unexpected blessing.

Janice was about ten years post-menopause when she started experiencing some unexplained spotting, so she consulted with John Stevens, DO of OB/GYN Care Associates of St. Luke's. Dr. Stevens commended her on listening to her body and addressing signs of a potential problem; in hindsight, it’s what led to such a positive outcome. Dr. Stevens ordered an ultrasound and biopsy and found cysts on her ovaries and thickening of the endometrial wall of the uterus - the latter of which was the likely cause of bleeding. Even though she never had any kind of surgery in the past, Janice decided to follow Dr. Stevens’s recommendation to undergo a complete hysterectomy with Nick Taylor, MD – chairman of oncology and chief of gynecologic oncology, St. Luke's Cancer Care Associates-Gynecological Oncology.

A post-surgery pathology report revealed a small polyp found in the endometrial lining of the uterus containing cancer. Dr. Taylor explained that fortunately, her uterine cancer was caught very early. “Janice had early Stage 1A uterine cancer found within a polyp,” recalls Dr. Taylor. “However the ‘serous’ cell in the polyp was a very aggressive cancer cell, so we needed to act quickly. Although uterine cancer is the kind of cancer we see most often, only about ten percent of uterine cancers contain this cell type.”

Janice was blindsided by her cancer diagnosis. She believed that her healthy diet, regular exercise and overall positive attitude protected her from such a fate. But once the reality of the diagnosis sank in, she went full steam ahead with her fight against cancer.

The first step in the battle was finding the right partner in her care. After consulting with Dr. Taylor about the pathology report and treatment options, Janice and Martin decided to get a second opinion, which Dr. Taylor encouraged. Having lived in Philadelphia most of her life and having a connection at the Hospital of the University of Pennsylvania, Janice decided to consult the oncologists there.

Dr. Taylor recommended treating her cancer aggressively with both chemotherapy and radiation - a full six rounds of chemo and a full gamut of radiation which would come under the direction of Nicholas Cardiges, MD, at St. Luke’s Advanced Radiation Oncology Associates. Penn’s second opinion concurred with St. Luke’s diagnosis, but differed on treatment strategy. The Penn specialists believed that three chemo treatments would suffice. For any patient facing chemotherapy treatments, three certainly sounded better than six, but Janice wasn’t naive enough to believe that fewer was necessarily better.

Janice and her husband ultimately decided to trust Janice’s care to Dr. Taylor at St. Luke’s. Not only was St. Luke’s the region’s leader in cancer care, but Janice and Martin had great respect for Dr. Taylor and believed he was very thorough, kind, experienced and knowledgeable. When Janice and Martin discussed Penn’s recommendation compared to his, Dr. Taylor remained unwavering in his belief that six treatments were best, but agreed to go forward with three treatments and then reevaluate the situation, adding more if necessary.

And so began her aggressive treatment schedule. “I was actually excited to start the process and tackle this head-on with Dr. Taylor and his team,” recalls Janice. “There were days when I felt achy and my whole body hurt – but I just kept telling myself to take it one day at a time, one step at a time, one treatment at a time.” Janice and her husband were so impressed with each and every one of the nurses and staff at the infusion center and radiation facility at St. Luke’s Cancer Center in Allentown. “Janice and I would always thank everyone at St. Luke’s who gave us a genuinely warm greeting,” remembers Martin. “They would respond by saying how much they loved their jobs and working for St. Luke’s - that really impressed us.”

Even though she was going through cancer treatment, which, by anyone’s standards, is very difficult, Janice was mindful that there were others who had it worse and her situation was a blessing. “I was always thankful that my cancer was detected early,” recalls Janice. “I know there are children suffering from this disease or moms with small children trying to hold it together through cancer treatments or even my teenage neighbor who was diagnosed with cancer and going through chemo at the same time as me - my heart breaks for those individuals. They inspired me and made me stronger. When I felt weak, I would think of them and I would have to stay strong.”

Finally, after the first three treatments, Dr. Taylor was confident that one final session would do the job. After the fourth treatment, he explained that given the risks and benefits of her chemotherapy journey from the beginning until now, the four chemo treatments coupled with three radiations had fulfilled her needs. A follow-up CAT scan supported his conclusion that all was clear. Now, Janice sees Dr. Taylor every few months for a checkup and bloodwork.

With her cancer treatment behind her, Janice is back to running the family business with Martin and doing all the things she loves - reading, cooking, walking, yoga, boating and spending time with her grandchild. “We were so grateful the day that Dr. Taylor told us that the journey was nearing an end,” says Martin. “We will never forget what Dr. Taylor and his staff meant to us during this time. They never seemed bothered or annoyed with our questions or concerns. Dr. Taylor and I even hugged on a few occasions - that’s how grateful I was to this man who cared for my wife of 37 years. Dr. Taylor and his team were true partners in our cancer journey. I know we made the right decision - St. Luke’s was truly the best place for my wife’s care.” 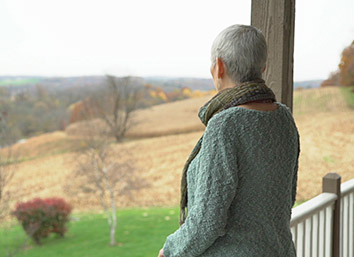