Like most women, Ellen’s life was focused on caring for others – her kids, husband and parents. Having a colonoscopy was not high on her priority list. Then, an emergency led her to the team at St. Luke’s.

As much as she treasured the time with her kids and understood the obligation of taking care of her parents and in-laws, she very much regrets not paying enough attention to a simple test that could have saved her a lot of fear, anxiety and pain. Had Ellen had a recommended colonoscopy starting at the age of 50, she may not have been diagnosed with late stage colorectal cancer.

Ellen was completely unaware of any health issues until one day, after she had returned from taking her mother-in-law to a cancer doctor appointment in New Jersey, she rushed to her primary doctor, John Berdini, MD, because of major rectal bleeding. Dr. Berdini immediately sent her for an emergency colonoscopy to get to the root of the problem. The colonoscopy revealed a large, malignant tumor, which needed to be dealt with immediately.

After meeting and consulting with surgical oncologist, Darius Desai, MD, FACS at St. Luke’s Cancer Center, Ellen decided to trust St. Luke’s to take care of her through her cancer journey. Ellen poignantly and directly asked him, “If I were your mother – what would you recommend for my treatment?” He honestly discussed the answer and step by step, laid out a plan so Ellen felt comfortable and confident enough to proceed.

“I was told by many well-intentioned friends and colleagues to consult with doctors at bigger facilities in large cities, but I trusted my St. Luke’s doctors and I had no interest in traveling miles away in what would already be a stressful time for my family and me,” says Ellen. “Plus St. Luke’s is a university hospital – they are teaching the doctors – they are the cream of the crop and that meant the world to me. I trusted them.”

“The plan for Ellen’s case consisted of shrinking the tumor down as much as possible in order to ensure the best chance of success for what would be a complicated surgery,” explains Dr. Desai. “The goal was not only to remove the tumor and any surrounding cancerous cells, but to preserve Ellen’s normal function.” After a combination of chemotherapy and radiation, Dr. Desai and his multidisciplinary team felt they had minimized the tumor enough to proceed with surgery to remove it completely. “I knew that Dr. Desai and his team would work together to make my life better,” recalls Ellen. “I truly felt that each one of them had a vested interest in my outcome; their compassion and sincerity was more and more obvious to me each time we spoke.”

After four months of chemo and two surgeries, Ellen was cancer-free. Ultimately, a colostomy bag could not be avoided because of the way in which the cancer had spread, but, as Ellen says “it’s OK because I’m alive and thankful for my new normal.”

Now 62, Ellen recalls that throughout her experience, there were definitely tough days, but she woke up every morning with a positive attitude. She would not allow cancer to win. “I got up and put one foot in front of the other, with a smile on my face as much as possible. She is amazed that for such a horrible ordeal, it was mostly a positive experience. She never felt like a number when she was cared for by St. Luke’s kind, caring, compassionate doctors and staff. “St. Luke’s has a great team – Asim Ali, MD, David Andolino, MD and Dr. Desai - all took such wonderful care of me,” says Ellen. “They have all seen me at my worst and they have helped me through a lot just by listening.”

After two years and seven months of treatments and surgeries, Ellen feels great! She’s spending time with her grandkids, cooking, baking, going for walks - everything she used to do before cancer. She sees her expert team of doctors two or three times a year and has regular CAT scans to make sure she remains cancer free.

Although colonoscopies are not something many people are eager to discuss, Ellen tries to get her “prevention” message out to everyone she meets. “I know it’s an uncomfortable subject, but people have to understand that the alternative to NOT getting regularly screened is to go through what I did,” says Ellen. “So if I have the opportunity to talk to people about my ordeal, they are usually scheduling their colonoscopies the next day!”

“In general, we’re recommending the American Cancer Society standard that patients with no family history of problems begin colonoscopy at age 50,” cautions Dr. Desai. “Most of the time, colorectal cancers start as polyps, which can be removed in a regular colonoscopy, so in that way, it’s a relatively preventable cancer.”

Looking back, Ellen learned many lessons from her cancer journey, like letting herself slow down, giving herself a break, appreciating every day and all the little things in life, but most of all, she learned that you can’t take care of anyone else until you take care of yourself. “Make sure you pay attention to signs and symptoms of a potential problem, listen to your body, and make sure you always get the recommended screenings for cancer. Get your colonoscopy, get your mammogram, don’t wait until it’s too late. These tests can save your life.” 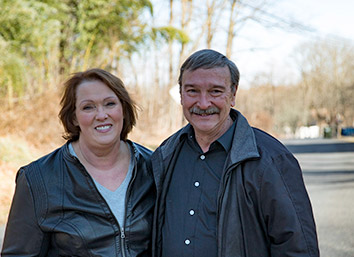