A kindergarten assistant from York, Pa., Lori travels two hours each way to see Dr. Agarwala and his team because they are the “melanoma experts.” With her disease stable, Lori can now focus on spending time with her family at their favorite place – the beach.

A few years ago, Lori, 57, of York, a kindergarten assistant, decided to be proactive about her health and scheduled a dermatologist visit for a full-body skin exam. She was never vigilant about protecting herself from the sun; she’s fair-skinned, light eyes and had countless sunburns throughout her life, so she thought her risk factors were high enough that she should get checked.

A local dermatologist’s in-office scan appeared normal, but Lori pointed out a small spot on her foot that was troubling because it was tender and would often bleed. The doctor removed it without much concern, but what Lori didn’t know at the time was that the small and inconspicuous spot would change her life forever.

Weeks after her initial dermatologist visit, the spot was back and again, bleeding and sensitive. She went back to a different doctor who biopsied it and scheduled her to see a local surgical oncologist right away. Lori was not alarmed because she thought it was something that could easily be removed with outpatient surgery.

And it was, for the time being. Fast forward a few months and there were other signs of problems including swollen lymph nodes, three of which were cancerous. Finally, one of her local doctors recommended an expert that he referred to as the best skin cancer doctor in the region, Sanjiv Agarwala, MD at St. Luke’s Cancer Center, who was conducting a clinical trial that might be a good fit for her.

Lori was fortunate enough to see Dr. Agarwala the very next day, just in time to meet the clinical trial deadline. Dr. Agarwala conducted a routine MRI and P.E.T. Scan, a prerequisite for the trial, and was surprised that the cancer had spread, disqualifying Lori from that particular trial.

The strategy needed to change because now they were dealing with Stage 2 Melanoma. “Although melanoma is a relatively less common type of skin cancer, it is very aggressive and tends to grow and spread fast, showing up when and where you least expect it,” explains Dr. Agarwala. Dr. Agarwala and his team removed the cancer and two months later, conducted the prerequisite testing again and this time, she was cleared to begin the trial.

After a few months, routine scans revealed that the cancer had spread to her liver and lungs. “This is when I finally got scared,” recalls Lori. “Up until this point, I always felt like my cancer was very standard and as annoying as it was, I never felt like my life was in danger. But after it spread to my liver and lungs, I finally realized that melanoma could be deadly.”

“Our team decided that Keytruda®, a type of immunotherapy specifically indicated for melanoma that has metastasized, would be the logical next step,” explains Dr. Agarwala. “It was powerful enough to help her own body attack the cancerous cells.”

But there were some setbacks and side effects, so soon after, Dr. Agarwala found another type of medication and the right dosing, which is what finally worked for Lori. She has been on this medication regimen for a year and a half with no side effects and all cancer has been kept at bay.

“It’s so important to have a doctor with whom you can really partner,” says Lori. “Throughout my treatment, I never felt alone. Dr. Agarwala, Amy, his physician assistant, and the staff were always responsive, always made me feel like I was their utmost priority. Because of that, everything that came my way was bearable.”

Lori and her husband of 32 years are now back to enjoying their beach house (always sitting under an umbrella with a hat and sunscreen, of course) and spending time with her two adult sons. She gets scanned every three months to monitor for changes, but all is good thus far. Lori looks back on her experience and is never bitter or sad. It was a tough time, but there were rays of light. “Without the kindness and compassion of the St. Luke’s staff, my tough days would have been that much tougher.”

Now, when Lori takes her kindergarten class outside on a sunny day, she always reminds them about the importance of wearing sunscreen. “I know you don’t like when your mommy lathers you up with sunscreen,” she tells her students. “But she does it because she loves you and wants to protect you.” The little ones don’t really understand that behind Lori’s warning is a personal battle with melanoma, but she hopes that someday, they’ll remember that Mrs. Riccardi told them to always protect their skin from the sun. 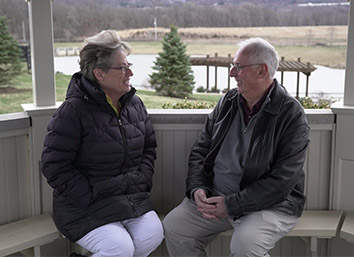