A nurse of 25 years, Dottie knew something was wrong. She’s worked with a lot of surgeons and doctors in her time, but found a true partner in Dr. Taylor. “He was honest and took his time with me. I trusted him.”

Dottie, of Kutztown, was not expecting the news she got in her doctor’s office that snowy Friday in January, 2013. And even though that life-changing moment wasn’t planned or expected, it had a lasting impact in unfathomable ways. Dottie knew she hadn’t seen her doctor for an annual Pap smear for almost five years, but she wasn’t worried. She was already 64 years old and on the other side of menopause, so not much was changing in terms of her gynecological health. But she was experiencing some changes in her body - like a growing waistline, frequent heartburn and having to urinate more frequently at night, which she chalked up to just getting older. So when she went to see her doctor on that cold, snowy day, she didn’t expect to hear anything out of the ordinary. But this was no ordinary visit.

Upon examining Dottie and feeling her distended stomach, the look on the face of her longtime general practitioner, Kimberly Legg Corba, DO, said it all - something was very wrong. A surgical nurse and RN for 25 years, Dottie understood that when Dr. Corba asked her to immediately go to St. Luke’s Allentown Campus for a CAT scan, her condition could be very serious. Still, she remained relatively calm - why worry about something when you don’t have all the facts?

After reading the results of her scan, Dr. Corba consulted with a colleague, a gynecologist, and they both concurred; what they saw (and felt) was troubling. Dr. Corba told her to stay put and wait for further direction. As Dottie waited alone at the hospital, still not wanting to worry her husband, sister or son and still not really wanting to worry herself, she couldn’t deny the facts - something was wrong with her body. She then got a call from a nurse from the office of Nicholas Taylor, MD, chairman of oncology and chief of gynecologic oncology at St. Luke’s Cancer Center, who explained to her that based on what they saw on the CAT scan, she would need to be seen right away. She scheduled an appointment with Dr. Taylor first thing Monday morning.

That weekend was filled with worry and “what ifs” for Dottie and her family, but Monday morning, she went into Dr. Taylor’s office, ready to bravely face whatever he had to say with her sister by her side. On the way to his office, Dottie told her sister that she would know right away if she was comfortable with this doctor. She’s been around enough surgeons to know if she’s encountered one she can trust. She also realized very early on in her nursing career, that there was a component to healing that came from a psychological/spiritual connection between doctor and patient and she knew that is what she needed right now - the bar was set very high.

As Dr. Taylor explained to Dottie and her sister what he saw on the scan and what he felt were her best possible treatment options, Dottie felt more and more confident that this was the man who would heal her. Dr. Taylor explained that Dottie had a tumor the size of a watermelon on her ovary cutting off the flow of urine to her kidneys, which was causing some of the symptoms she was experiencing like heartburn, frequent urination and distended stomach. He recommended surgery to remove the growth. “My instincts as a nurse told me, ‘this is a good person,’” recalls Dottie. “When my sister and I were leaving his office, I touched his arm and I said ‘I trust you’ and he said ‘I trust you too.’” And from that moment on, Dottie knew she had a partner in this fight. “Dr. Taylor is the perfect balance between humble and confident - a combination that I haven’t always seen in surgeons,” continues Dottie. “He looked me in the eye, he made me feel safe and encouraged. I believe that the trust we established that day was the beginning of the healing.”

“One of the most important things I conveyed to Dottie and to all of my patients, is that we are here for them over the course of their cancer journeys - cultivating that patient relationship is probably the most satisfying part of my job,” says Dr. Taylor. “I want patients to know that there are options and they have support - not just from their families but from the physicians and staff at St. Luke’s - it’s important that they know they are not alone.”

Her surgery was scheduled for the very next day and after a complete hysterectomy, removing the tumor and taking a close look at her lymph nodes, it initially looked like further treatments weren’t necessary. But after further review of the pathology, Dr. Taylor recommended six chemotherapy treatments and a year of IV cancer therapy over the course of 18 months. Dottie was devastated, not only because the idea of going through chemo was daunting, but because she hated sharing news like this with her family and friends, especially her husband, sister and son, when she knew how much the worry would burden them.

Dottie says that her chemo treatments were no picnic (she experienced all the usual side effects of such a potent drug - malaise, exhaustion, hair loss) but she tried to be positive. It helped having positive people around her, especially nurses like Beata Rothrock who took care of her during her treatments at St. Luke’s Cancer Center. “Beata’s name actually means ‘blessing’” explains Dottie. “And she was such a beautiful blessing to me - she was the most sweet, kind nurse I have ever encountered and I am a nurse! All the nurses there were extraordinary - loving, kind, helpful - I actually felt pampered!”

Eventually, Dottie’s Stage 1 cancer was removed. Now, she is back on a regular regime of bloodwork and twice yearly office visits. She credits a variety of factors to her positive outcome, any of which would be powerful on their own, but combined, were a force to be reckoned with! Her family, her faith, her positivity and her choice of doctor all combined to get her where she is today - a happy, active, cancer-free grandma with a full life ahead. “And that’s what I try to convey to everyone with whom I share my story, especially in my work as a spiritual director,” says Dottie. “I want them to know when you put together a formidable care team and you believe in yourself and have faith in God, good things can come from cancer. Cancer taught me more than any teacher, any experience has ever taught me and for that, I am thankful.” 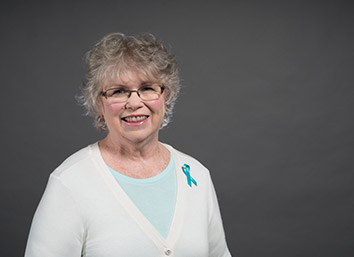