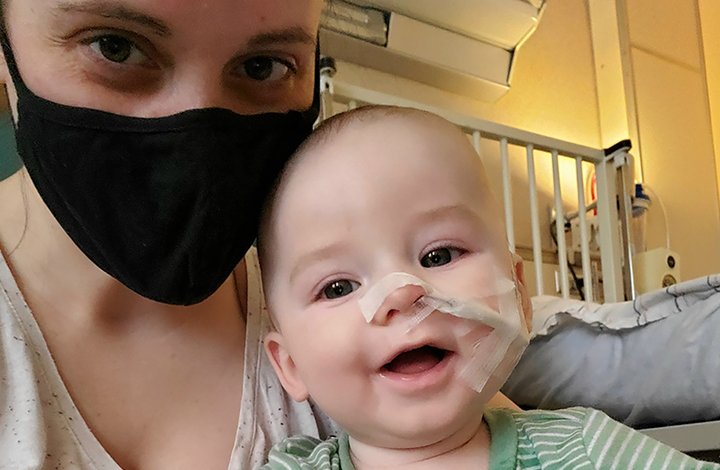 Becca was overjoyed at the birth of her son Jules in August 2020 following several miscarriages.  But by the time her first child was four months old, Becca was alarmed.  Due to torticollis in his neck (a condition where a child's head persistently tilts to one side) Jules was never effectively able to breastfeed, but as he grew older he had difficulty swallowing, had an aversion to the bottle and even struggled to swallow water.  “I was watching my baby starve,” shares Becca.

Exhausted and scared, Becca and Jules were referred to David A. Blanco, MD, St. Luke’s pediatric gastroenterologist.  Dr. Blanco quickly diagnosed Jules with gastroesophageal reflux disease (GERD) and milk soy protein intolerance (MSPI), both contributing to his failure to thrive.  Although she was terrified, Becca remembers Dr. Blanco exuding complete confidence in his ability to help Jules, which gave this new mom relief and hope.  “He literally escorted me from his office at the Doctor’s Pavilion over to the hospital, where a nasogastric (NG) tube was inserted through Jules' nose and into his stomach,” explains Becca.

Weighing in at only 12 pounds, five-month-old Jules began tolerating formula.  His hair started to grow again, he was smiling more and had energy.  Eventually the NG tube was replaced with a gastrostomy tube (G-tube) and, much to his parents' delight, 22-pound Jules started crawling!  According to Becca, Jules is now eating eggs, bananas, croissants and is drinking through a straw.  Says Becca, “Jules would not have made it without St. Luke’s and Dr. Blanco.”

Passionate about helping as many patients as he can, Dr. Blanco has a special interest in nutrition. “Nutrition plays a large role in many gastrointestinal (GI) conditions, so once we address those nutritional issues, many of my patients get better,” he says.  Dr. Blanco is part of St. Luke’s growing team of pediatric specialists who evaluate, diagnose and treat acute and chronic conditions.  He regularly collaborates with St. Luke’s other pediatric specialists – including pediatric dieticians – to ensure the best outcomes for his patients.

With an established relationship built on trust, Becca and Jules continue to see Dr. Blanco every three weeks.  “Our appointments are very calming at this point,” says Becca.  From Dr. Blanco and the nurses to the staff and the nutritionist, Becca feels like part of one big team.  “They address all my concerns and I get answers the same day – I always feel heard,” says Becca.

At his most recent appointment, 17-month-old Jules arrived drinking water and walking.  Says now pregnant again Becca “They saved us!  They saved Jules!  I know it sounds dramatic, but it’s the truth.”