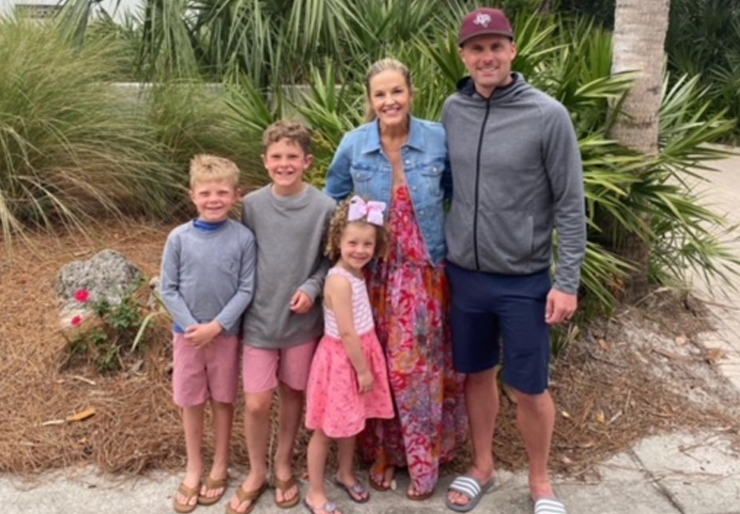 Lauren Sullivan says she had a “gorgeous experience” at St. Luke’s. Last year, Sullivan offered to serve as the gestational surrogate to help out her friends, Vanessa and Chad (last name withheld for privacy), who had experienced infertility problems. Now, she’s “Aunt Lauren” to tiny Sloane, born at 7 lbs., 4 oz., on Feb. 19 at St. Luke’s Anderson Campus.

Gestational surrogacy is a process in which a woman agrees to carry a fetus to term for another person or persons. She has no genetic connection to the child: the mother’s egg and the father’s sperm are implanted through in vitro fertilization.

Sullivan, age 38, of Center Valley, praises the care she received at St. Luke’s during the pregnancy and delivery.  She should know—she and her husband have three children—ages 8,6 and 4, all born before they moved to the Lehigh Valley.

“From the food service, to the cleaning people, to the doctors, nurses, everyone at St. Luke’s was wonderful,” she says.

Her OBGYN Stephanie Lum, MD, of St. Luke’s Riverside OBGYN, noted that, despite her “advanced maternal age,” Sullivan was in great health, though she needed iron infusions during the pregnancy.

According to the Centers for Disease Control and Prevention, “Between 1999 and 2013, gestational carrier cycles resulted in 13,380 deliveries.”

Amanda Lutz of Montgomery County, also a surrogate, called both her prenatal care at St. Luke’s Stoneridge OBGYN, in Sellersville, and her delivery at St. Luke’s Upper Bucks Campus, “amazing.” She gave birth to a baby girl last November, after she carried her for a couple who wishes to remain anonymous.

“The doctors and nurses know their stuff,” says the 34-year-old mother of two to her own children, aged 3 and 8. With her first pregnancy, she also was a patient of Stoneridge OBGYN. Both births took place at other hospitals before the St. Luke’s Upper Bucks Campus was built.

Lutz’s OBGYN specialist for this pregnancy, Brandon Martin, MD, also of St. Luke’s Stoneridge OBGYN, described her pregnancy and delivery as uncomplicated. He began taking care of her eight weeks after she became pregnant through a frozen embryo transfer created by the baby’s parents after they went through in-vitro fertilization.

Dr. Martin praises his patient’s willingness to carry someone else’s child as “an amazing act of selflessness.” He notes that medical risks during a gestational surrogacy are generally the same as for another pregnancy.

He lauds the nurses and support staff at St. Luke’s Stoneridge OBGYN for their compassionate, attentive care when treating Lutz and involving her partner and the baby’s parents.

“Dr. Martin is the absolute best,” say the parents. “He always made us feel so comfortable and welcome and supported, as did the nurses at St. Luke’s. Their care was above and beyond our expectations.”

“The birth of ‘surrobaby’ at St Luke’s was my easiest delivery due to Dr. Martin and the St Luke’s nurses’ care and expertise,” adds Lutz.

Lutz calls her St. Luke’s experience “fantastic!” And she says when she starts a “sibling journey” next year as a gestational surrogate for the same family, she’ll go to St. Luke’s Stoneridge OBGYN and St. Luke’s Upper Bucks Campus, and with good reason.

“They handled it perfectly! Everyone was fantastic. It was an experience of a lifetime, and I would do it again for the parents in a heartbeat. They’re such a deserving and loving couple,” Lutz says.

Sullivan says she had her best pregnancy care and birth experience at St. Luke’s. Simply put, she says, “St. Luke’s is outstanding!”