First Facility Dog Is Ready to Comfort and Motivate Patients 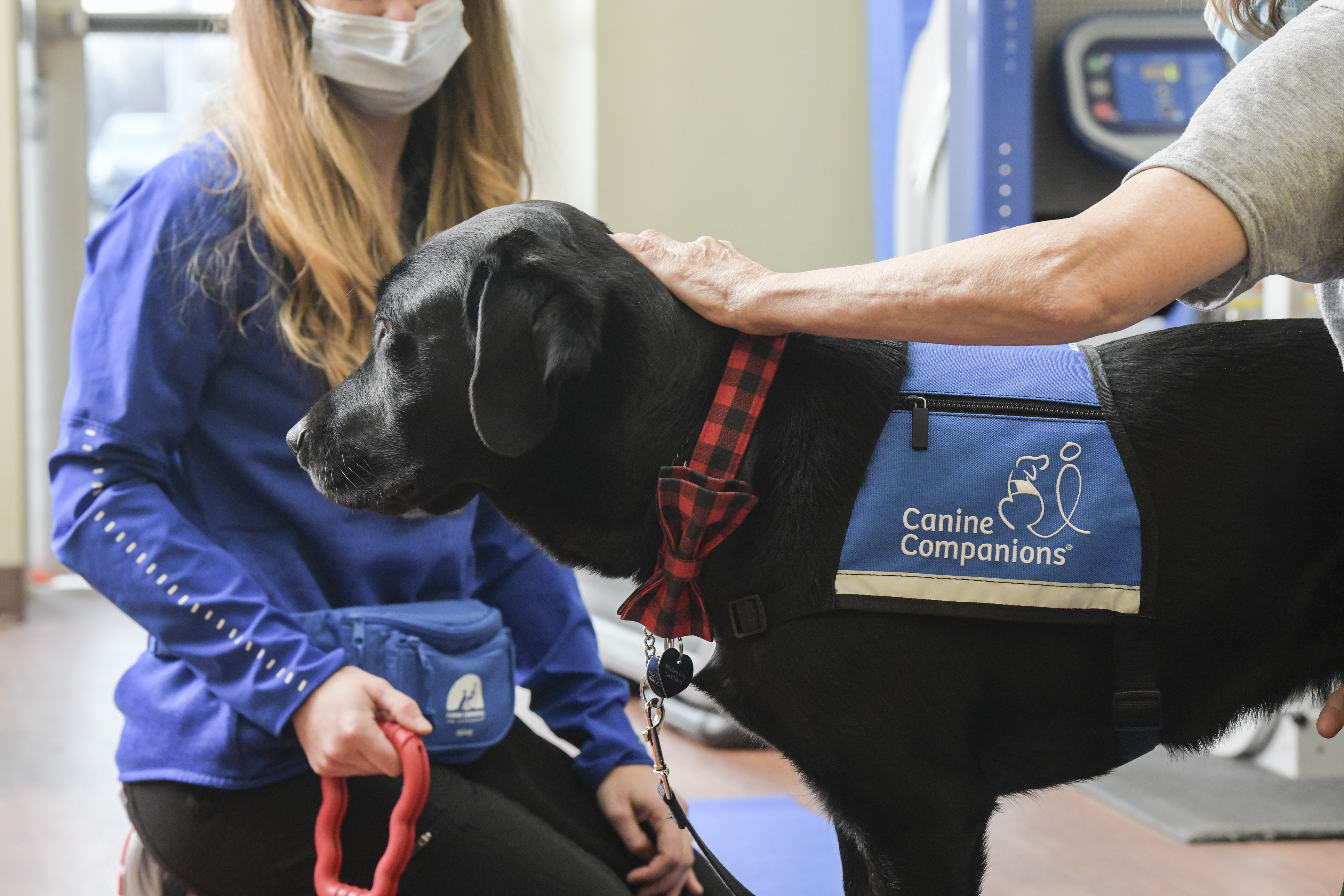 Everyone’s excited about Franklin, the new worker of Physical Therapy at St. Luke’s. For the past two years, he’s been groomed for his position, and he just graduated from a six-month professional training program. He’s not only special; he’s the first of his kind to ever work at a St. Luke’s University Health Network facility.

Franklin is a facility dog, who started working at Physical Therapy at St. Luke’s Hillcrest Professional Plaza in Phillipsburg, NJ in October. Franklin and his co-worker, occupational therapist Erin Verdon, MS OTR/L, work as a team to calm, encourage, support, motivate and treat patients. In addition to the Phillipsburg location, Franklin will also work at Physical Therapy at St. Luke’s Clinton, NJ facility.

“Facility dogs are not just dogs who lay around and let people pet them,” Verdon said. “We use them as instrumental tools to engage the patient in the activity.” She stressed that facility dogs are very different from therapy dogs. Well beyond being just friendly and well-behaved companions, facility dogs know how to use more than 40 advanced commands. These include:

Prior to joining St. Luke’s about two years ago, Verdon had worked with a facility dog named Frita on a stroke unit. Recalling a patient who had weakness on the left side of her body, she said, “It brought the patient such joy to work with Frita – brushing her and doing grasp and release exercises to work on her arm strength. She was depressed after being in the acute care hospital and this interfered with her progress. However, working with Frita in inpatient rehabilitation motivated her to participate in therapy and to use her arm. In her PT sessions, she would walk to Frita.”

Having witnessed the benefits of facility dogs in a rehabilitative setting, Verdon suggested that Physical Therapy at St. Luke’s apply to receive a facility dog of their own. With her supervisors’ support, Verdon contacted Canine Companions, the same agency that had trained Frita. The organization provides service dogs to adults, children and veterans with disabilities, as well as facility dogs to professionals working in healthcare, criminal justice and educational settings. The dogs, their training and all follow-up services – valued at more than $50,000 – are provided at no cost thanks to the generosity of donors and volunteers, said John Bentzinger, public relations and marketing coordinator.

Canine Companions has their own breeding program and pairs service dogs that show the best qualities for specific roles. Franklin, a mix of Labrador and golden retrievers, was born in the home of a volunteer breeder-caretaker where he stayed until he was eight weeks old. Then he moved into the home of a volunteer puppy raiser in Virginia who taught him household manners and basic commands, such as sit and stay. After a year and a half, he moved to Canine Companions Northeast Regional Training Center on Long Island for six months of professional training. At the end of this time, Franklin and other dogs in his professional training class were introduced to prospective clients.

“We provide two weeks of team learning for people who have applied for a Canine Companions service dog.” Bentzinger said. “When people arrive to begin this training program, the dogs are already fully trained. During these two weeks, we’re teaching the humans how to use the commands and how to care for their dogs.”

That’s where Franklin met Verdon. She explained that Canine Companions professional instructors consider a dogs’ future assignments and observe how clients interact with several different dogs.  After careful observation, the life-changing match is made between the service dogs and clients.

At the end of two weeks, the team must pass an assessment examination from Assistance Dogs International Inc. When Franklin and Verdon are working together, they are certified as a team. The certification entitles Franklin to wear a vest that identifies him as a service dog. After work, the vest comes off and he goes home with Verdon as her pet.

Bentzinger thinks St. Luke’s was a good choice for Franklin, saying, “Instead of helping just one person, he will be able to help many, many people.” He added, “When our service dogs put on their vest, they know it’s time to work. They love to work. Their tails are always going a thousand miles an hour. When it’s time to retire, usually around 10 years old, they let us know that too.”

Just beginning his career, Franklin is still getting accustomed to his surroundings, Verdon said. It will take about six months until he will be able to employ all of his training, but she is excited about what they will be able to do together.

“Dogs have the ability to decrease blood pressure, and reduce stress levels,” Verdon said. “Having a facility dog will assist patients psychologically through major transitions in their lives and motivate them to do their therapies.”

Verdon is using Franklin during physical therapy sessions by directing patients to give Franklin stackable therapy cones that he can hold in his mouth, and then removing them one at a time. This works on strength. Also, he accompanies patients who have a neurological condition on scavenger hunts. Verdon explains that the patient – who might have had a stroke or a traumatic injury – hides plastic eggs around the therapy room. Then the patient leads the dog to where they are hidden. When the pair reaches a drawer, for instance, the patient must remember and say the command “tug” for Franklin to open the drawer, “get” for him to pick it up in his mouth and “give” for him to put it in the patient’s hand.

Verdon explains that during the scavenger hunt the patient has to remember where the items are hidden, as well as the sequence of commands, while also walking and maintaining balance. The exercise improves the patient’s memory and cognition. “These are challenging exercises,” Verdon says. “Franklin makes it fun and entertaining.”

Verdon especially looks forward to Franklin working with her neurological patients. “These patients are going through life altering events,” she said. “Having a facility dog will impact their therapies by motivating them to participate in balance training, upper body coordination and cognitive skills.”