Dramatic Increase in Number of Sports Physicals at Allentown Schools 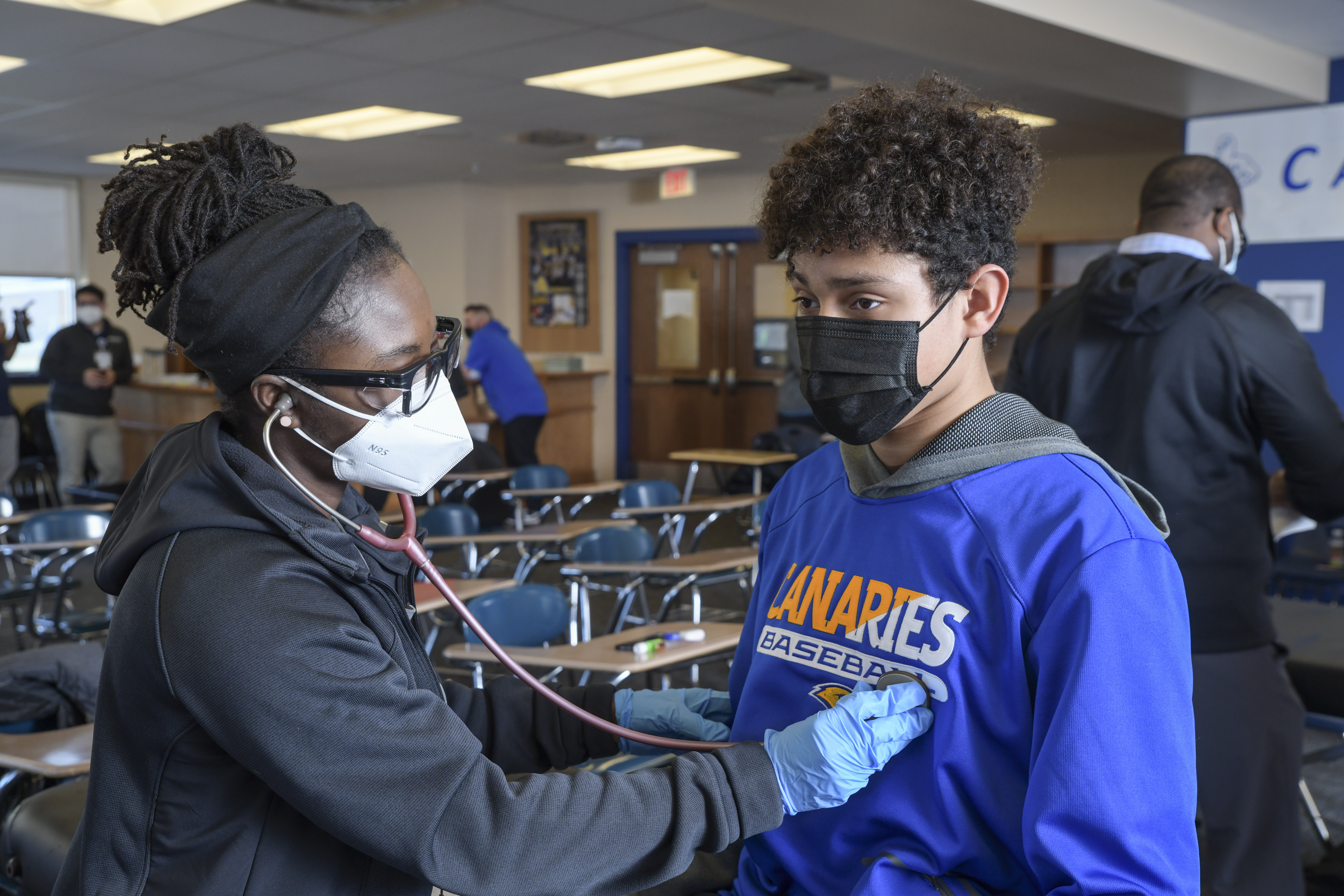 When you look at the numbers in the Allentown School District, it’s almost miraculous.

From the 2020-21 school year to the 2021-22, winter sports physicals provided by St. Luke’s physicians jumped by 162 percent at Allen High School, and 178 percent at Dieruff High School.

And it’s not even pandemic related. Amy Cotter, MS LAT, ATC, the St. Luke’s Sports Medicine Coordinator at Allen High, saw a problem and created a solution thanks to teamwork between St. Luke’s and Allentown School District.

“When we had them after school, it was good, but even then there were some issues where kids had to leave to pick up their little brother or little sister from elementary school, or go to jobs,” explained Allen High athletic director Randy Atiyeh. “Amy and I went back and forth sharing conversations about some of our obstacles, and she said, ‘What if we can get some doctors to come in during the school day?’ I said that was brilliant.”

Dr. Manuel Puente, a Family Medicine physician and member of the Faculty at St. Luke’s Sacred Heart Family Medicine Residency at Star Community Health Sigal-Allentown, had been involved in the after-school physicals and immediately bought in to the idea, enlisting the aid of his superior, Dr. Robert Langan, Director of Resident Education.

“We had been noticing those after-school physicals weren’t getting a lot of kids to participate,” Dr. Puente said. “We had discussions with several people, and we decided the best thing to do was offer them during the school day to capture as many kids as possible not only to play sports, but because some of these kids don’t even have access to regular physicals.”

By involving residents from the Sacred Heart Family Medicine Residency Program of St. Luke’s the numbers of physicals not only offered a spectacular jump from the previous, year, but helped identify medical issues in some of the students, thus benefitting families of students who did not receive regular medical care.

“Moving the physicals to the school day has been a game-changer for our students,” said Dieruff High School athletic director David Stoudt. “This past winter at Dieruff, we increased our total by 200 percent compared to last year. We are extremely thankful too Amy Cotter and Dr. Puente for working together to make this happen for Allentown School District students.”

The increases were more impressive given that fewer and fewer students were taking sports physicals in the Allentown School District at both the middle school and high school levels. The traditional after-school physical model just wasn’t working.

While the total winter physicals at the middle school level were impressive, there are no 2020-21 numbers to compare them to because the district did not offer middle school sports that year because of the pandemic.

At the high school level, the numbers show an impressive jump.

“In the end, the point of doing these physicals in school made them more available to the student-athletes, and the students in general,” Cotter said. “We aren’t dealing with jobs, family or other issues getting in the way. We can thankfully take 10 minutes out of their school day so they can be seen by a physician to play their sport.

“At the middle school level, we’ve had so many kids turn out, even ones who may not try out for a specific sport. At least they have received a physical and are eligible to try something. It allows them to try out when something sparks their interest. Who knows, we might find the next big star.”

Dr. Puente said it makes him happy to reach into the school and offer such a program.

“I was a high school athlete and played sports the majority of my life,” he said. “I understand the significant role sports can play in a student-athlete’s life. To me, this is about getting as many students as we can to play and keep them off the streets and away from trouble. Sports helps them learn life skills like discipline, teamwork and leadership that they may not always be learning at home.”