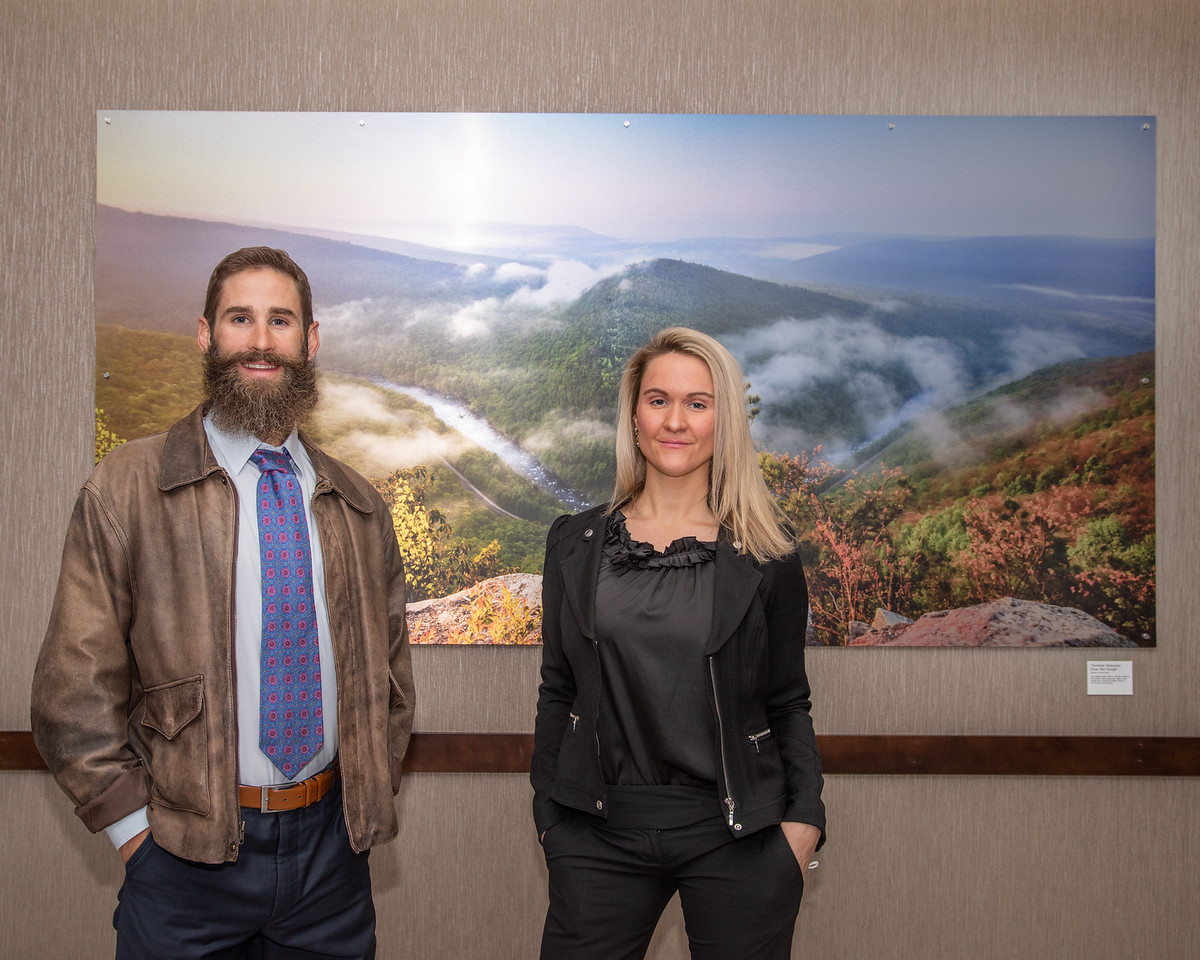 Pictured are Andrew Charles Price and Melissa Kish. Behind them is Price's piece "Where The Sky Meets The Dew."

St. Luke’s interior designer Elizabeth Srock knows that a space’s décor can go a long way in making someone feel comfortable, safe and welcomed. With this in mind, she adorned the interior of the new St. Luke’s Carbon Campus with photographic art pieces that showcase the region’s charming small towns, local landmarks, and most importantly, its natural beauty.

“When I first started my research to come up with ideas and concepts for the new campus, I began googling the area,” she says. “It was the imagery of the landscape that really spoke to me. It’s just gorgeous.”

Srock suggested decorating the new campus with bold regional scene photography by local artists. She believed that photography would create a fresh, modern look to the space, and as such would focus on the area’s future and its amazing natural resources. The color palette for the hospital’s walls, floors and furnishings, reflect the tans, browns, grays, blues and greens of the area’s flora.

“At St. Luke’s, we give amazing healthcare,” Srock says. “Our interior spaces convey that no matter what walk of life you come from; we’re here to care for you. You matter. The goal of my job is to take each campus and give it its own identity – an identify that honors the local community and its residents. That’s important.”

“I wanted to highlight artists who create photographic artwork for a living,” Srock says. “At our new campus, St. Luke’s has the opportunity to put their work out there in this huge medium of patients, families, visitors, staff and physicians who come through our hospital doors.” To give the artwork a gallery-feel, next to each photograph is a placard describing the image, where it was taken and the name of the photographer who created it.

A member of the St. Luke’s Carbon Campus Management team and Srock’s friend, Channel 13 weather forecaster Dave Allen recommended Desha Utsick of Jim Thorpe. Kish and Srock selected 38 of her pieces, including photographs of forests, lakes and waterfalls, as well as local wildlife, such as a buck, a bear cub and birds.

One of Srock’s favorite photographs – or in this case a series of photographs – shows a bench overlooking a lake. Utsick shot the same setting during each of the four seasons. “I just love the thought of someone sitting on a bench and watching the seasons,” Srock says. “I think it has a deeper meaning.”

Kish’s favorite art piece was taken by artist Andrew Charles Price of Bethlehem – a large image titled Sunrise Heavens Over the Gorge displayed right off of the lobby. Price, who frequently works with St. Luke’s, was commissioned to take photographs of popular local spots, including Lehigh Gorge, Beltzville and Hickory Run State Parks. Hanging in the emergency department and other waiting rooms, they offer provide a calming image and encourage healthy outdoor activities.

Another local artist, Stephen Cunic of Signs by Tomorrow, Allentown, not only took several shots, but also recommended photographic treatments, including prints on brushed aluminum, which creates a modern, yet rustic feel. His pieces include a sunflower field with the hospital in the background. It hangs across from the elevators, near Human Resources.

St. Luke’s emergency department nurse Jason Stewart rounds out the artists, Srock says, adding, “We wanted to highlight employees, because we have so many talented employees.” His photographs line the hallway from the emergency room to radiology and grace some of the patient rooms.

Photographs of Carbon County’s charming small towns adorn the walls of the Human Resources Department to remind current and prospective employees that St. Luke’s is proud to be part of the community, Srock said.

Called Rick’s Café, the cafeteria is styled as a ski lodge. The Pennsylvania Snow Sports Museum donated the vintage wooden skis and black and white photos of skiers taken in the 1950s that hang on one wall. Blue Mountain Resort provided a photograph of its ski slope, and with the help of Madison Art Consulting of Philadelphia, Srock, and KIsh converted the picture into a water color wall mural at the café’s entrance.

“The painting is so beautiful it makes you want to go into the cafeteria,” Srock says. “If your family members are in the hospital and they’re sick, you could come downstairs, sit in the cafeteria, have a cup of coffee, look out the windows and see the beautiful scenery. For a few minutes, you feel relaxed – not like you’re in a hospital but in a café.”

Srock, whose passion is pediatrics, also worked with Madison Art Consulting to create a whimsical graphic art wall treatment in the emergency room. It depicts birds and a red fox in an evergreen forest. Partially hidden behind tree limbs, the St. Luke’s star peaks out.

“We were so happy to utilize all these spaces around us,” Srock says. “We want the community to be proud of what was on the walls because the photographs are a tribute to where they live. I think that’s so important in healing to have that sense of pride in what’s around you.”