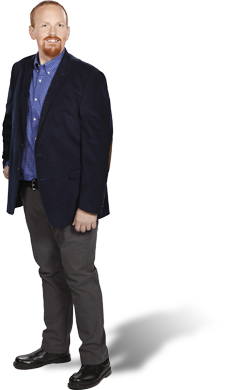 Like millions of Americans affected by obesity, Christopher Ellis of Bethlehem, had serious health concerns caused by his weight. When his obstructive sleep apnea literally became too much to bear, he turned to the experts at St. Luke’s Weight Management Center.

Chris was always the “fat kid” and his weight remained steadily high throughout high school and college. As an adult, that “fat kid” mentality was still very much a part of who he was and in fact, how others saw him. As his weight increased, so did his depression, anxiety, sleep apnea, high blood pressure and prediabetes. He didn’t want to go out because he felt others were staring and he didn’t want to exercise because his joints hurt and his legs would swell. The only thing he DID want to do was eat. It became a vicious circle; the heavier he was, the more sedentary he would remain and the more junk food he would consume. Even the simplest things, like chores around the house or walking from his car to his office, were torturous. Repeating this pattern of poor eating and inactivity for years and years, he reached his heaviest at 581 lbs.

The final straw came on Thanksgiving Day when a small winter storm left a coating of ice along his sidewalks. While putting salt down, he slipped and could not get back up on his own. Not because of the ice, but because of his weight. Had someone not seen him, he could have been stuck there in the freezing cold. “It was embarrassing, frustrating and scary, but it was the catalyst I needed to save my life,” recalls Chris. “I knew my body had reached the point where I could no longer lose weight on my own; I needed something to jump start my weight loss.”

His research on bariatric surgery led him to St. Luke’s Weight Management Center. “St. Luke’s has the best reputation in the area for being a quality, high volume bariatric center,” says Chris. “I liked that they also provided education and counseling for nutrition, behavior modification, emotional readiness and fitness - all of which played a part before and after my surgery. I knew it would be a big lifestyle change, and I felt the St. Luke’s program was better equipped to help me change my habits as opposed to just doing a surgery.”

After Chris’ laparoscopic roux-en-y gastric bypass surgery, he lost 331 lbs. and has kept it off for nearly five years. The extra weight is a thing of the past as are his comorbidities like obstructive sleep apnea, hypertension, prediabetes and edema in his legs.

“I am no longer out of breath doing small tasks around the house or walking for extended periods of time,” says Chris. “I no longer have sleep apnea or prediabetes and I’ve gone from three medications for high blood pressure at the highest doses to one at the lowest dose. My joint pain in my knees and ankles is gone. By achieving my healthy weight, I have decreased the likelihood of developing certain life-threatening illnesses while improving my overall quality of life.”

Chris says that he feels like he’s lived two different lives - one mostly sedentary and sad and the other, active and energetic. “For the first time, I feel like I am living my life and enjoying things I love,” says Chris. “I no longer have to worry whether or not I’m physically able to do things - it’s really something you take for granted unless you’ve been inhibited by something like obesity.”

Chris encourages others who are fighting obesity and comorbidities like obstructive sleep apnea to make the best decision for yourself and understand that weight loss surgery requires a drastic lifestyle change; if you are not ready for it emotionally, you may not be successful. “You still need to work for it if you want long-term success,” says Chris. “But know that getting rid of the extra weight and all the problems associated will give you back your life so you can actually experience it instead of watching it pass you by.”

Contact Us
Attend a Free Seminar! Get Started NOW