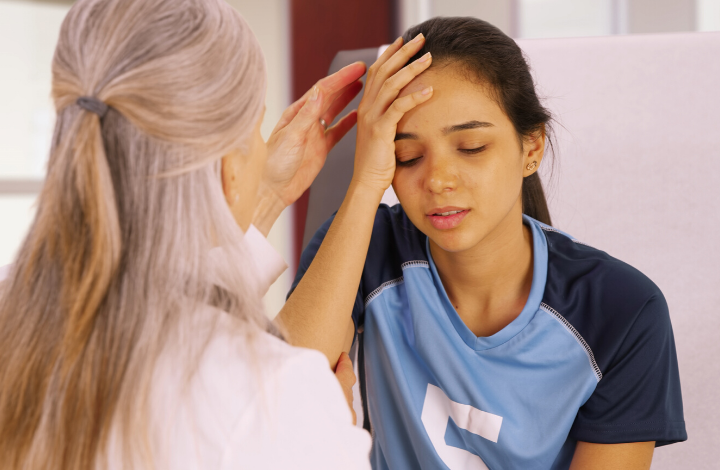 If you’ve seen a violent helmet-to-helmet collision of football players, you’ve witnessed one of the most common causes of a concussion today. But a traumatic blow to the head isn’t the only way to suffer this brain injury, says Brett Keller, DO, concussion specialist, primary care and primary care sports medicine physician with St. Luke’s Orthopedic Care in Phillipsburg, Clinton and Belvidere, NJ.

“Any motion of the head that involves an abrupt stop could potentially cause a concussion, too,” he says. “You don’t always need an external impact.”

Athletes playing contact sports, like football and hockey, are understandably at higher risk for these injuries than the general population. But, people of all ages and walks of life can suffer them from falls, car accidents and any sudden blow to the head from inside or out.

Concussion symptoms can arise immediately after the incident or take up to 24-48 hours to develop. These telltale signs often include one or several of the following and should be reviewed and confirmed by a specialist like Dr. Keller or someone trained in sports medicine or concussion management:


“To diagnose a concussion on the sideline of a game, we observe an athlete’s behavior and may administer a series of questions, either verbally or on an iPad, to help determine if they potentially have suffered an injury,” says Dr. Keller. Parents, teachers, coaches and other adults are wise to know these warnings, too, he adds.


If the initial assessment of the player is inconclusive, he errs on the side of safety: “If in doubt, sit them out.”


“Removing someone from play is the safest step if you’re not sure,” he cautions. “The phrase, ‘something’s not right’ about a player is a good reason to keep him out pending a professional evaluation.”


CT scans are only recommended following an injury if the person’s neurologic symptoms are extreme and a brain bleed may be suspected. A CT scan will never confirm a concussion and exposes the patient to the equivalent of 100 x-rays., so they can pose a danger over the long term if repeated often.


Rest is the best treatment

Resting an athlete, or other concussion patient, is the best treatment for the injury, says Dr. Keller. “Symptoms often resolve in 2-3 weeks, during which physical and cognitive stimulation must be reduced.”


For teens, this includes spending less time in front of computers and other digital devices to reduce visual stimulation. Exercise should be curtailed, then can be resumed gradually after symptoms abate. Complex schoolwork and tests, exposure to lights and loud noises and other stressors should be minimized during this period of healing, Dr Keller adds.


He likens a concussion to a shaken snow globe. “You have to wait until the snow settles, which is like the brain’s chemicals normalizing.” People with visual problems, a history of prior concussions, migraines, attention deficit disorder, sleep issues or anxiety often should have more time to recover.


When it’s safe to compete or work again

Return to play protocols, based on international guidelines, include gradual resumption of mild exercise, followed by increases in activities in complex movement and skills use. Athletes are questioned, watched and monitored for symptoms and other signs that the concussion has resolved before being cleared to play. If there’s any warning sign, the healing period is prolonged.


Dr. Keller keeps a miniature NY Jets helmet on his desk as a reminder of his year-long fellowship with the team in 2015, during which he learned how the NFL was following concussion protocol. He has used these skills as an advisor to area sports teams.


“I often tell patients and parents that I use the experience to guide how I take care of high-school athletes,” he says. “I say, ‘we follow the same concussion protocol with them that we do with our NFL players.’”


Returning to work and learning, too, should be slow and steady with visual and complex thinking stimulation increased in small increments.  Premature restarting of demanding physical or mental activities can bring neurologic complications, recovery delays or even more serious consequences, warns Dr. Keller.


The long-term effects of multiple concussions, and repeated blows to the head are unknown right now, says Dr. Keller, though “We realize it’s a hot topic these days and needs more research at this point.”


What is clear, however, is that protecting our athletes and ourselves from head injuries, recognizing the signs of a concussion and giving patients enough time and support to heal, can’t be overvalued for anyone.


“We have to focus ultimately on safety,” Dr. Keller says. “Because an injured brain impacts every aspect of life.”