Allentown, PA (April 27, 2017) -- There’s nothing typical about Claudia Gadelha. At 5-foot-4 and 115 pounds, Claudia can not only knock the chip off your shoulder as one of the top women’s Strawweight fighters in the Ultimate Fighting Championship (UFC) but she could do it before you even knew what was happening. And you can find her training at St. Luke’s Fitness & Sports Performance Center - West End with John Graham, senior director of St. Luke’s Fitness & Sports Performance, as she steps up her conditioning program for her next fight on June 3 in Rio de Janeiro, Brazil. 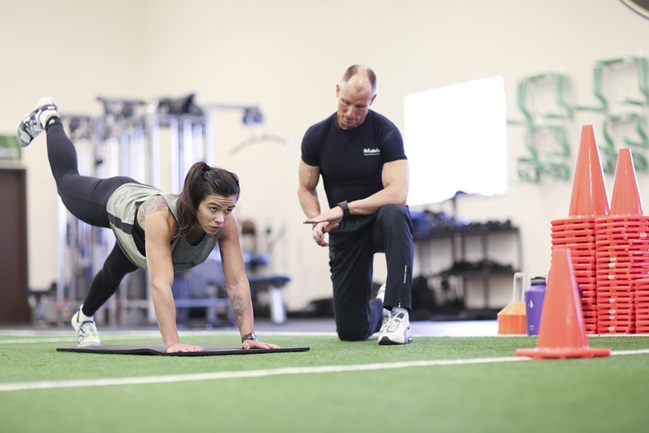 “John is a great coach,” Claudia says. “I was looking for somebody like him my entire career. I have been through hard fight camps in my life and I had coaches that used to break my body down. John builds my body up and I am very confident in what we are doing together.”

The Brazilian native is 14-2, with the only two losses to champion Joanna Jedrzejczyk. She bounced back from her most recent loss to Jedrzejczyk with a unanimous decision over Courtney Casey in UFC Fight Night 100 last November in Brazil.

That victory set the stage for a June 3 fight against Karolina Kowalkiewicz in UFC 212, with the winner getting a shot at the title.

“I will be UFC champion soon,” she predicts. 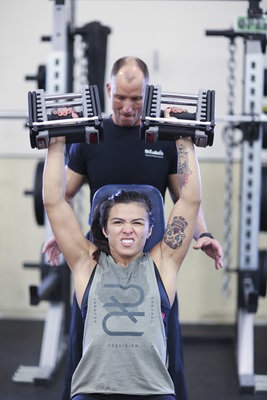 To help get her ready for this fight, Reebok, one of her sponsors reached out to Graham, whom they knew as a frequent lecturer for the international equipment company Perform Better, manufacturers of functional sports performance, training and rehabilitation equipment like medicine balls and sports bands.

“She’s been training here since January and she loves it because she feels her core is getting a lot stronger,” Graham says. “Her core already looked inhuman. She doesn’t just have a six-pack. She has an eight-pack. Not many people in the world have a core like hers in terms of abdominal musculature. But she also feels a lot stronger than she’s used to feeling.”

Claudia, a three-time world champion in Brazilian Jiu-Jitsu, is increasing her strength, power and conditioning at St. Luke’s facilities with Graham’s help. She has been training in the United States for more than a year, first in Albuquerque, NM, and more recently in New Jersey where she opened Claudia Gadelha's MMA & BJJ.

“I come from humble beginnings,” Claudia says. “I never really had the opportunity to do anything nice in my life. My parents always worked very hard for me and my sisters, but I never had a lot [of comforts]. I always have been very hungry, always felt like doing different and crazy things in life, and got introduced to Brazilian Jiu-Jitsu at the age of 14. I felt in love with the sport and it changed my whole life. I fought my first professional MMA fight when I was 18.”

Graham’s training regimen conditions Claudia to fight more effectively, powerfully and with more sport-specific endurance. Graham plots out a completely individualized workout that identifies the muscle groups most critically necessary for her performance, and utilizes the most modern methods of training to produce maximum gains.

She trains on his program three days a week, about 90-100 minutes per workout.

“They are hard sessions, so I always do them in the mornings to have time to rest my body for the other sessions that I have during the day.”

On the days she does Graham’s program, she adds four hours of technique training. She trains about six hours a day on the other four days of the week when she does her regular fight training.

“We obviously want to work on her core,” Graham explained. “Everything from her shoulders through her knees are critical for her best performance. We focus on training those muscle groups from the core, and we train them through the three planes of motion you do for most sports performance work.”

Claudia exercises through the sagittal plane, the frontal plane and the transverse planes to hone her sports performance. Graham specifically works with front-to-back motion she utilizes when punching forward, side-to-side motion for when she’s avoiding a punch, a kick or a take down attempt, and rotationally to perform hip tosses and other throws, or when connecting the upper and lower extremities through the core with kicks and punches.

“The reason we do this is that we are trying to develop three different energy systems simultaneously, just like she would use in a fight,” Graham explains. “We’ll do 30-60 seconds of interval consistent movement patterns like burpees or mountain climbers to develop the energy system she needs in case she’s in a scramble for 30 seconds. We do it all as one big giant set.”

Claudia’s goal is to keep her heart rate above a certain level so that she feels like she’s working all the way through a 5-minute round of fighting.

Claudia regularly travels back to her home in Brazil, so her training with Graham and St. Luke’s is often remote. Graham has her constantly monitoring her heart rate to get the most effective results from her efforts.

He also measures her workload, the volume of weights she’s lifting/moving in a given workout, and charts them to create reports. Just two months into the program, she’s at a 60 percent gain, which Graham says means she’s 60 percent stronger from a performance standpoint in a given workout.

Graham says knowing those numbers is a critical factor the closer it comes to fight night when it’s time to taper the training so that her fight performance conditioning isn’t left in the gym.

“It’s not an easy life,” Claudia says. “It takes a lot to be a professional athlete, even more when you are dedicated as I am.”