Joe Stofanak took a moment of reflection and didn’t like what he saw in the mirror.

What he needed was motivation. And a plan.

“It was one of those things where I needed something to motivate me and inspire me back onto a path to a healthier lifestyle,” Joe said. “John and I are pretty close in the sense of colleagues, but we’re also friends. He said, ‘Why don’t we sign up for the St. Luke’s Half Marathon in April? That would be a great way to get things started.’ ”

Not only did the training program turn out to be a great way to get thing started, it led to a transformative action plan that has completely changed the way Joe looks and feels. 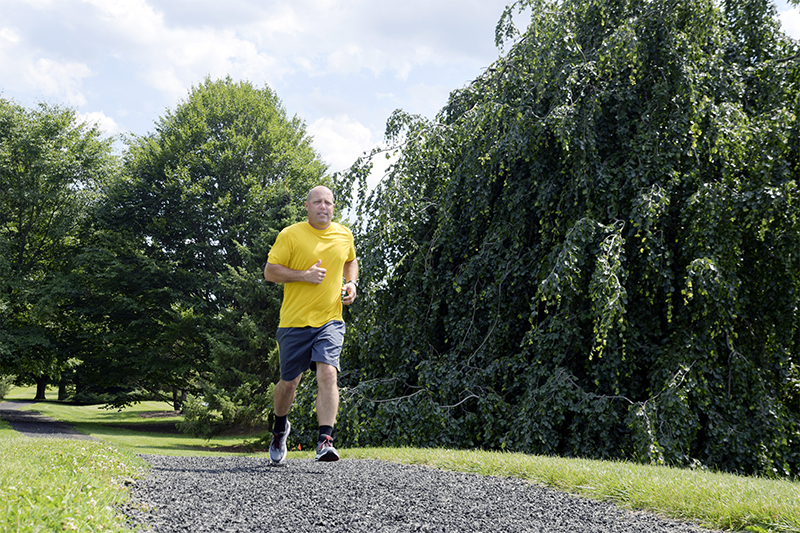 Joe runs on the trail

Over the course of his half marathon training from January 2 until the half marathon on April 26, Joe lost 41 pounds through exercise and refining his eating plan, and went from pushing a size 38 waistline to a 32.

“I hadn’t been a 32-inch waist since high school,” Joe said with a proud smile.

“I give all the credit to Joe,” Graham said. “We developed a running program for him that we’re incorporating into our entire running training program within the network.”

That plan addressed some orthopedic issues of Joe’s left knee that had undergone ACL reconstruction.

Joe literally started out by running a half mile two days a week and completed other work on the elliptical machine and stationary bike in order to improve his cardiovascular fitness.

In addition, he worked on strength training and conditioning through a process known as metabolic training that combines strength work and movements that force the cardiovascular system to work in a variety of cardio zones.

“He was able to increase lean body mass while he lost body fat because of that,” Graham explained. “The thing most impressive about his success was hearing about how his clothing sizes were changing. His weight was reducing, but most importantly, he was feeling much better as he continued to progress with his program.”

“In my closet, I have about 60 polo shirts and button-downs that are too big anymore,” Joe said. “I have four boys the oldest is 18, and I can wear his shirts.”

“Inactivity and weight seemed to be the two biggest factors for my knee pain,” he said. “I haven’t had any knee pain for the last three months. I think a lot of it was weight-driven.”

Joe charted his workouts and diet on a spreadsheet, and listed goals. Despite starting out at just being able to run a half mile, he followed Graham’s plan that included a weekly long run.

“It progressed a certain amount to where four miles became five miles, and you can’t believe you ran five,” Joe said. “And then a few weeks later you’re running eight or nine and you didn’t think that was ever possible.”

His longest run before the half marathon, which is 13.1 miles, was 12 miles, but the race was simply one more step in the program. He said he felt great and finished in his target zone between 2:10-2:15.

“The biggest medal for me,” Joe said, “was crossing the finish line and seeing the people there who supported me, my wife Lisha, my boys Joey, Ryan, Connor and Mikey, and of course John Graham was right there, too.”

Not only is he continuing on with his healthy lifestyle plan, but Joe is targeting his next half marathon in the St. Luke’s Via Marathon races the weekend of September 7-8.

While a mirror and scale may have triggered Joe’s initial motivation, success is running it now.